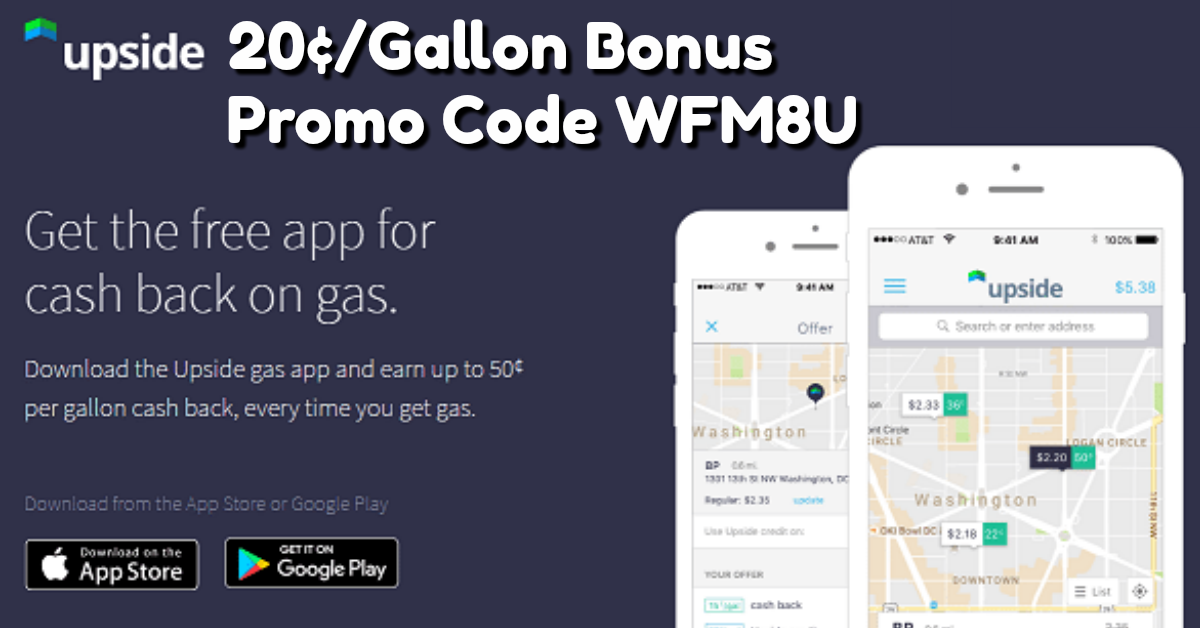 GetUpside is an app that gives you cash back on your everyday purchases.  You simply link your credit and debit cards to GetUpside, spend as you normally do, and GetUpside deposits the cash back into your account!

If you’d like more information on GetUpside, please be sure to read our GetUpside review.  We gave GetUpside 4.5 stars out of 5!

And as of March 2021, the GetUpside Promo Code WFM8U will give you an extra 45¢ off per gallon.

GetUpside is a free app that gives you free money back for gas up to 25¢/gallon.

Fill up your car a few times a month, and you’re looking at over $100 in savings a year!

What If My GetUpside Promo Code Doesn’t Work?

If your GetUpside promo code isn’t working, it’s possible that one of the following three things is happening:

What Is the GetUpside App?

GetUpside is a free mobile rewards app that does all this for you:

How Does the GetUpside App Work?

Here are the steps:

That’s it!  And there is no minimum withdrawal amount to your Paypal account!

How Much Can GetUpside Save You?

GetUpside can save American drivers quite a bit of money each year.

According to the U.S. Energy Information Administration, Americans used about 142 billion gallons of finished motor gasoline in 2018.

Dividing that 142 billion gallons of gasoline over the approximately 212 million licensed drivers in the United States yields an average of 670 gallons of gas used per American driver per year.

Of course, this number is probably skewed high if we’re considering the “average American” because the 142 billion gallon figure we used for total gasoline consumption includes commercial use, so let’s round down to 600 gallons of gas used per “average American” per year.

If the average driver used GetUpside for all of those 600 gallons at $0.25 saved per gallon, that would be an extra $150 in their pocket every year!

Can You Really Get Cash Back at Restaurants Too?

Yes, in certain locations, you can get up to 35% cash back at restaurants!

However, this feature is not in all locations yet, but hopefully it will be!

When Was GetUpside Founded?

GetUpside is actually super new. It was just founded in 2016.

That’s why they’re so generous with their 20¢/gallon sign-up bonus; they’re trying to raise awareness about their app and platform.

Where Does GetUpside Work?

Heck yeah you should. It’s a free app that gives you money. What’s not to love?

They need more locations in Northern VA, namely Fairfax and Prince William counties. There are very few gas stations and no grocery stores or restaurants.

Just started trying this app, seems like a gas version of Ibotta.

I just started using this app last week and I’ve already earned $10. My code WFM8U gets you a 15¢/gal bonus. https://upside.app.link/WFM8U

Hi there, if you would like to sign up and use code N9ATP I would appreciate it. We would both get 20 cents off per gallon of gas. Thank you 🙂
https://upside.app.link/N9ATP