Cartoons NFT: How This Transparent Team Is Building a Strong Community

We have all kinds of NFT projects coming out this year with different mechanics or utilities. Each project is trying to one-up one another.

While projects continue to strive for more, Cartoons is going back to the roots of NFTs by creating a community-driven PFP collection.

Cartoons NFT is a PFP collection of 7,777 clouds living on the Ethereum blockchain.

Here’s what makes them different.

Cartoons NFT was created by a small team of five completely doxxed members.

If you visit the Cartoons NFT website, the only information you find about the project is the team behind it and a few answers to frequently asked questions.

The project is in the early stages, but the team wanted to be as transparent as possible and doxxed themselves from the start. 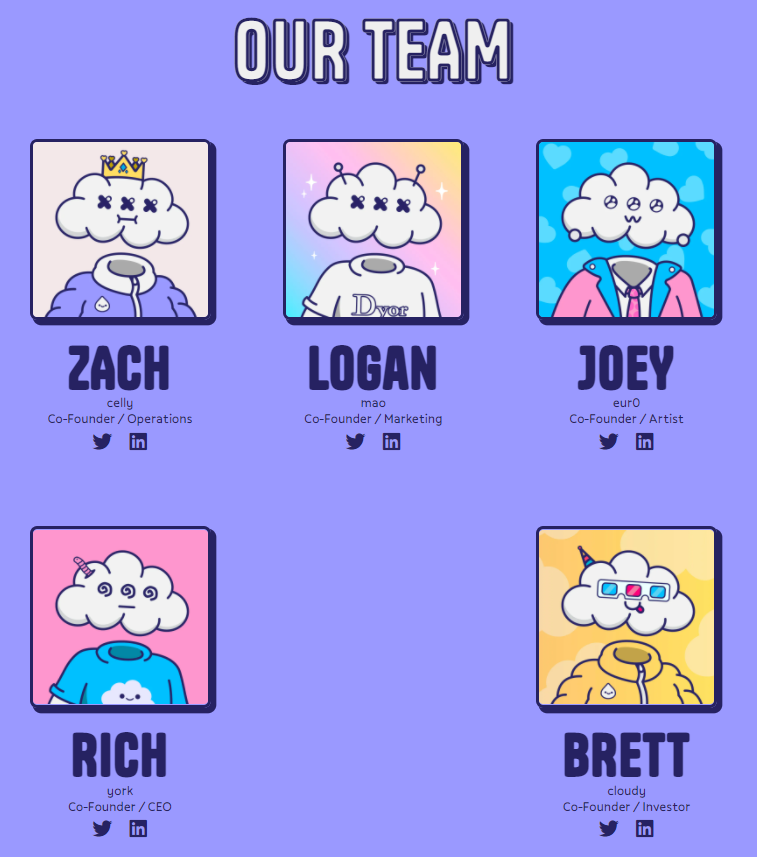 Zach Conley, or “Celly,” is the head of operations. Zach is the president of Bored Capital, a digital marketing agency specializing in the crypto industry.

Logan Simmons, aka “Mau” on Twitter, handles all the marketing for the project, which we’ll talk about later. Logan has a background in sales, marketing, and entrepreneurship. He founded CBD Legally in 2018, an online marketing place featuring top brands in the CBD space.

Joey Pescatore, or “Euro,” is the lead artist for the Cartoons NFT. He’s a graphic designer who worked alongside Logan at Volume Digital. Joey created his first company in high school called Vision Collective.

At first, Vision Collective started designing and selling shirts but has branched out into a creative agency and independent music label with over 200,000 streams.

Richard Henne is the CEO of Cartoons NFT. On Twitter, he goes by York or Rich. Like most of the team members, he’s co-founded other business ventures.

In Richard’s case, he helped create Ivory Ella, a clothing company for a good cause – saving the elephants. To date, they’ve donated over $2 million to Save the Elephants and other charitable causes.

The last founding member of the team is Brett Lawrence, the investor behind the project.

Honorable mention is Matt Steffanina, a Bored Ape owner and an advisor for the project. You won’t find Matt on the website, but he hosts Twitter spaces for the Cartoons NFT.

I tuned in (pun intended) to one of the spaces to hear how the founders talked about the project and could genuinely tell how passionate and grateful they are for the community they have.

You can tell the team is focused on the big picture and understand that they need a solid foundation to create something tremendous long-term.

I don’t usually dive into each team member when I review NFT projects, but Cartoons NFT is all about transparency. They want to be upfront throughout this whole process, so they’re completely doxxed and in the open.

I was thrilled to see that the team was doxxed because the art caught my attention.

The art is incredible.

It’s a profile picture collection, and it fits the mold perfectly. It’s simple, colorful, and easily recognizable as a PFP.

all engagements with this post will be considered for toonlist ?

It has a similar style as Doodles, incorporating various bright colors.

They got the idea to use clouds in the project because they had their heads in the clouds trying to come up with ways to incorporate cartoons into NFTs.

The lead artist, Euro, whipped up a sketch for a cloud-based NFT, and the team ran with it. They use the sketch now as one of their PFP for their Twitter account.

The Cartoons NFT team has released sneak peeks of three characters so far and has admitted that there are more to come.

Judging by this tweet, another character should be revealed soon.

a new character is coming to the tooniverse ?

Another great thing about the art is the 1/1s. I love when collections have 1/1s that are unlike any NFTs in the collection, and Cartoons NFT seems to agree.

They released a few sneak peeks on Twitter of what the rarest Cartoon NFTs will look like.

First was this all-gold umbrella NFT.

we’ve saved some toonlist for a rainy day ☔️

you know what to do ⤵️ pic.twitter.com/y3ybDwbE2u

Next was this cloudy constellation.

the stars have aligned in the tooniverse ✨

there may be a toonlist in your future ?

Overall, I’ve enjoyed the art they’ve shared so far and am looking forward to seeing more of it.

How the Cartoons NFT Works

As I mentioned in the introduction, Cartoons NFT goes back to the roots of what NFTs are all about, being community-driven.

Cartoons NFT created 7,777 unique clouds with no promises of utility. So, for now, it’s a PFP collection.

Most projects now are focused on utility and building a roadmap to impress investors. The problem is, this often leads to overpromising and underdelivering, or even worse, a rug.

Cartoons NFT is taking the road less traveled and releasing their project with no benefits outside of being a part of a great community.

They aren’t making promises they can’t keep and are being extremely transparent with the project.

There have been a ton of rugs and sketchy projects recently, so it’s the perfect time for a transparent project like this to drop.

So it’s no surprise that Cartoons NFT created their Twitter a week ago and already have over 40,000 followers.

The team has been overwhelmed by the engagement they’ve gotten and admit that they didn’t expect things to happen this fast.

With how relatable their mission statement is, it’s hard not to want to buy into the project.

Time flies, everyone misses the days of Saturday morning cartoons. We are firm believers in the idea that the kid in all of us is still present and we all deserve to express it as we wish. The world of NFTs is so prevalent due to the nostalgia we all feel from the things we miss in our childhood. Let’s continue to dream big and keep our head in the clouds.

NFTs are a channel we can use to express ourselves. Cartoons NFT is a way to bring out the child at heart.

How to Buy the Cartoons NFT

Cartoons NFT don’t have an official mint date quite yet.

When asked when will Cartoons launch? Here’s what the team had to say:

The release of the cartoons universe is determined by the community itself & when our founders feel the community can support the project being released. Stay active and ensure you have our notifications enabled to make sure you don’t miss a beat!

How many NFTs projects openly say something like this? Most projects set a mint date in advance and push it back repeatedly if they don’t think they’ll sell out.

Cartoons NFT are simply being honest by saying we aren’t going to mint until we feel the community can support the project to our standards.

Every NFT project has this mindset, and Cartoons NFT is the only project that’s upfront and honest about it. As a result, it makes the project much more relatable.

Although they haven’t announced when they’ll be minting, they have announced that it will cost 0.07 ETH to mint a Cartoons NFT.

0.07 ETH is a very affordable price, which shows that they want to include everyone in the community.

Another way to include more people in the community was reducing the mint max.

Initially, the team set the max mints per wallet at five, but once they saw the hype Cartoons NFT was getting, they reduced it to two NFTs per wallet so more people could join the community.

The team has announced that they have a whitelist, which they call “Toonslist.”

The Discord is invite-only, and at the moment, I’m on the outside looking in. So I don’t have all the details about the whitelist.

However, they don’t want the whitelist to be a grind, so they will handpick active members in their Discord.

They are constantly tweeting out Discord invites and Toonlist spots raffles in unique ways.

Check out this crossword version of discord invites.

Sometimes they don’t even add directions to the Tweets to reward people who have been followers and know that you need to retweet to be considered.

the stars have aligned in the tooniverse ✨

there may be a toonlist in your future ?

Since I’m not in Discord, I’m not sure how many Cartoons NFTs will be available after the whitelist pre-sale.

In one of the Twitter spaces, the team said they plan to leave some NFTs left over to have a public sale but didn’t hint at a specific number.

The mint price will be the same 0.07 ETH as the pre-sale.

If there are a limited number of Cartoon NFTs available during the public sale and you don’t get one, you’ll have to buy on the secondary market via Open Sea.

Their Discord isn’t public, so it’s no surprise they don’t have an OpenSea account yet. When the OpenSea is announced, make sure to use the official links channel in their Discord, so you don’t get scammed.

For an NFT project with this bit of information available about it, Cartoons NFT has impressed me.

I love how transparent the team has been by doxing themselves and speaking to the community directly via Twitter spaces.

When you listen to them, talk you can genuinely tell how passionate they are about the project.

Recently, there’s been a ton of FUD in the NFT market, but Cartoons NFT has found a unique niche by underpromising and over-delivering.

I’m not on the whitelist or in the Discord yet, but I’d love to get a whitelist spot for this project.

I’ll definitely attend the public mint if I don’t get a whitelist spot come launch.

Since the mint price is affordable, I’ll likely try to mint two. If I’m unlucky and can’t mint during the pre-sale or public mint, I’ll see if I can buy in at a reasonable price on the secondary market.

I really enjoyed covering this project and am looking forward to more information about their future.

That’s just my opinion. Feel free to disagree. Let me know your thoughts in the comments, and follow me on Twitter.