New Bipartisan Stimulus Plan To Be Released This Week

New Bipartisan Stimulus Plan To Be Released This Week

This is my stimulus update for Monday, September 14.

First I will go over second stimulus news and I will give the latest on state-by-state unemployment news for the $300 or $400 a week retroactive unemployment.

I didn’t do a stimulus update yesterday because frankly there wasn’t much to talk about.  I did still create a video yesterday on GDP and the 32.9% annualized drop that we saw last quarter.

So in my August 16 update — almost a month ago — I told you about the bipartisan Problem Solvers Caucus, which is a coalition of fifty members of the House of Representatives.  Twenty-five Republicans and twenty-five Democrats, the Wikipedia page says there’s forty-eight members, that’s wrong, there are fifty, so if any of you all are into updating Wikipedia, update that.

And according to Treasury Secretary Steven Mnuchin this morning on CNBC the Problem Solvers Caucus is going to release — wait for it — their own stimulus plan today.  Will it happen today, not sure, but I’m curious what these “problem solvers” will come up with.  Will Pelosi like what they’re coming up with, will some of the Republican fiscal hawks in the Senate like what they come up with, I don’t know, but this proposal — whatever it is — is significant because it will be the first truly bipartisan stimulus proposal we’ve seen since the CARES Act, excluding of course things like the bill that extended the PPP.  Is this Problem Solvers’ proposal going to be our stimulus savior, I kinda doubt it, but the fact that we’re finally going to see something bipartisan is hopeful.  That said, it could just be another bill whose purpose is as members of the House, many members within this caucus are relatively young and new, so many the purpose is just to put something together so they can tell their constituents, “Hey, I really tried my darndest to do something, but it was the old brass in both parties, Pelosi and Mitch who have been in D.C. way too long, they’re the ones to blame, not me.”

Anyway, Mnuchin also said that he is fearful that Nancy Pelosi is letting politics get in the way here because she doesn’t want to help people before the election.  But he did say that he and Pelosi will be talking this week about the government funding bills, the continuing resolutions that we’ve spoken about previously on the channel.

Like I said last week, all forty-nine states that applied, as well as the District of Columbia, have been approved by FEMA for the grants, the ones in dark purple have paid or are paying at least in some respects, some states they might only be paying PUA recipients right now and everybody else is going to get it later, but the dark purple states are the ones that have paid or are currently paying. 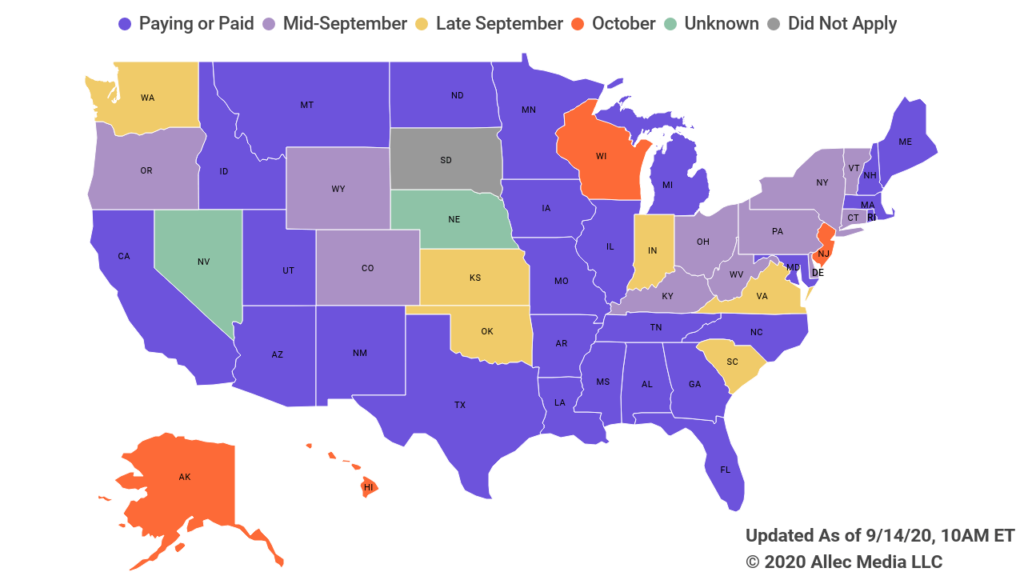 The ones in light purple I expect to pay or start to pay hopefully this week.  Colorado expected September 17, Connecticut has said mid-September, Delaware is reportedly starting to issue payments today, New York said they would roll out payments this week, Pennsylvania has said payments will start today, Ohio expected this week, Kentucky supposedly paying now or later this week.

And the ones in orange I don’t expect to pay until October.  Hawaii, for example, is now saying they will start processing payments in October.

Nevada and Nebraska were the last two states to be approved by FEMA for the grants, and we haven’t really heard anything yet as to when they plan to pay.