This is my stimulus, election, and unemployment update for Monday, September 28.  There’s frankly not a whole lot of stimulus news to cover, I’m going to talk a little bit about stimulus but then I’m going to respond to something Trump said about the election yesterday, and then I’m going to cover unemployment at the end as I usually do, and if you’re in Virginia, I unfortunately have some bad news for you.

But first of all, I’ve had a lot of friends ask me what I think about the New York Times piece on Trump’s taxes.  I am hesitant to say anything definite one way or the other because the Times has not released the actual records they claimed to see to support their article.

Of course, to “protect their sources,” they are not revealing the source documents.  Until I can actually view these records myself, I might throw some conjecture out there, but it’s tough to speak authoritatively about someone’s taxes unless you actually see the records themselves.

That said, I will be putting on my CPA hat and releasing a video this week responding to the New York Times piece on Trump’s taxes that was published yesterday, so please be sure to subscribe to the channel to make sure you don’t miss that.

September 30, that’s this Wednesday, this is the deadline for those on Social Security, SSDI, SSI, Railroad Retirement Benefits, and V.A. Benefits who do not file a tax return to use the non-filer’s tool to report their qualifying children under the age of seventeen in order to get the $500 for them.  IRS originally had this deadline back in the spring, but now they’ve extended this deadline to this Wednesday, September 30.

For everybody else, you have until October 15 to file your tax return or use the non-filers tool to receive a stimulus payment this year.  If you don’t do so by October 15, you can claim a credit for the stimulus you’re due on your 2020 tax return that you’ll file next year.

Where Are We With Second Stimulus?

But in terms of second stimulus, where are we?  Well, Dems are slated to release their new proposal this week, we’re thinking it’ll come in at $2.4 trillion dollars, and similar to the Republicans’ skinny bill, this isn’t a serious bill, Republicans aren’t going to go for $2.4 trillion dollars, it will simply be another bill that House Dems can point to their constituents and say, “Hey, we wanted to do it, we passed the HEROES Act, we passed this bill [I assume they’re going to take a vote, we’ll see], but it’s those Republican scoundrels who didn’t want to take it up in the Senate.”

On CNN yesterday Pelosi made it sound like we can do a deal, this proposal the House Dems are coming up with this week, she made it sound like something that could really reinvigorate negotiations, but I’m not feeling it if that’s her topline in this bill.  That said, we did get the report from one of Pelosi’s staffers that Mnuchin and Pelosi want to start talking stimulus again.

And that’s really where we’re at with second stimulus in terms of Congressional advancement.  Trump, of course, could try to pull something, right, kind of like with the $200 Trump cards that he announced last week.

What Trump Said About the Election (Electoral College Tie)

Now, let’s talk about Trump’s speech.  Everyone’s talking about his taxes, which I’ll do a dedicated video about, but I think in that excitement a lot of people missed something going on.  So here’s the clip, and then I’ll explain it.

Trump: All I’m asking is people go out to vote, go out to vote, and stop with this nonsense because we’re going to be counting ballots for the next two years, and I don’t want to end up in the Supreme Court, and I don’t want to go back to Congress either, even though we have an advantage if we go back to Congress.  Does everyone understand that?  I think it’s 26 to 22 or something because it’s counted one vote per state.  So we actually have an advantage, oh they’re going to be thrilled to hear that, I’m sure they’re trying to figure out, “How can we break that one?”

What did Trump mean when he said, “We have an advantage if we go back to Congress.  I think it’s 26 to 22 or something because it’s counted one vote per state.”  I’ve seen a lot of misinformation about this online, so I thought I would clear up what’s going on here and how Nancy Pelosi is responding to it.

So let’s back up.  We all know that the presidential election is not decided by outright popular vote i.e. how many people get more votes throughout the nation.  For example, in 2016, Hillary Clinton received more votes nationwide than Donald Trump, but obviously Trump still won.  The election is determined by the electoral college.

Now, it is possible for neither candidate to win the 270 electoral votes required to win the presidency.  There are faithless electors, which are electors who don’t vote according to the statewide popular vote.

So what happens next?  Well, we have to look to the 12th Amendment to the Constitution, which says, “If no person have such majority [referring to an electoral college majority] then from the persons having the highest numbers not exceeding three on the list of those voted for as President, the House of Representatives shall choose immediately, by ballot, the President. But in choosing the President, the votes shall be taken by states, the representation from each state having one vote; a quorum for this purpose shall consist of a member or members from two-thirds of the states, and a majority of all the states shall be necessary to a choice.”

So the 12th Amendment says that if no presidential candidate gets a majority of the electoral college, the election goes to the House of Representatives with the top three presidential candidates “running” at this point and each state delegation getting one vote, so therefore currently because there are 50 states, the candidate would need at least 26 of these House delegation votes to win a majority of the 50.

What did Trump mean when he said the Republican advantage in this scenario is 26 to 22?

But here’s the kicker.  This election in the House would be held after any new representatives take office and outgoing incumbents leave office.

So, Trump is saying the Republican advantage is 26 to 22  right now, but that could change with the 2020 congressional elections.

That’s why yesterday Nancy Pelosi sent a letter to her Democratic colleagues, saying, “If Joe Biden doesn’t get 270  electoral votes certified, the 12th Amendment would require the House to decide the presidential contest.  But instead of giving every member of Congress a vote, the 12th Amendment gives each state one vote, which is determined by a vote of the state’s delegation.  In other words, how many state delegations the Democrats in this upcoming election could determine who our next president is.”

She went on to urge the Democrats, telling them, look, these House races in November are not just about keeping the Democratic majority in the House, it’s about flipping the Republican majority in terms of state delegations.  She said, “We must achieve that majority of delegations or keep the Republicans from doing so … We have outstanding candidates in key districts and they have built strong campaigns, but we must forcefully ensure they win.  Simply put this strategy to protect our democracy and elect Joe Biden will take an all-out effort and resources.”

Now, this scenario is of course a long shot, but it’s a possibility, and I wanted to clear up any confusion you may have about this scenario, and I want to use this opportunity to encourage you to vote, whether you’re a Democrat or a Republican or something else.

Because maybe, just maybe, even if you’re a Republican in a blue state or a Democrat in a red state, and you think oh, my vote for the president doesn’t count, well, it just might, local races are extremely, extremely important as well, please don’t be one of those people who thinks, “Well, you know I’m in a red state, I’m not even going to vote,” don’t think like that, get your ballot, research your candidates, and let your voice be heard.

For those of you in Virginia, I have some bad news.  I was checking the Virginia Employment Commission website this morning, and unfortunately, they snuck some new language on there, saying, “The VEC is in the final stages of programming for LWA. We expect programming to be complete and the agency to begin making payments October 15, 2020. However, you must complete the LWA attestation process with Gov2Go.” 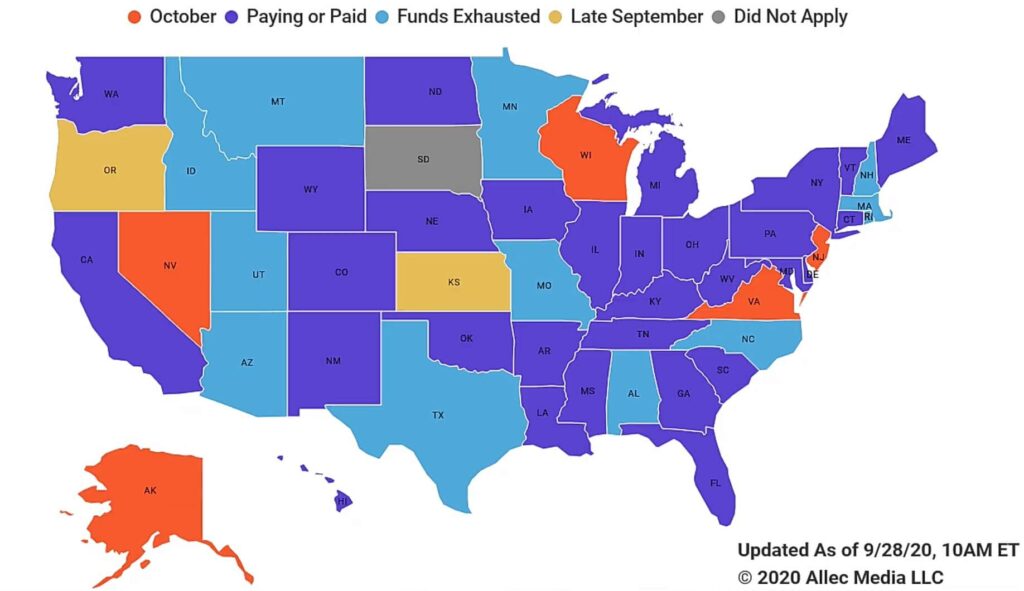 They originally said September 30, but it looks like they’ve pushed it back to October 15, I’m very sorry about this, I know a lot of you were hoping to get your money sooner than that.  So unfortunately based on this information Virginia is now orange on my map, indicating October.