This is my stimulus update for Sunday, September 6.

So as is often the case on Sunday mornings, Treasury Secretary Steven Mnuchin was on Fox earlier today, saying that he and the President want more stimulus, Steve, we’ve heard it all before.

But one thing that Mnuchin said that I found very interesting is that he apparently sees no issue with doing a stimulus bill now that’s super targeted and then maybe doing another one in 30 days, here’s the clip.

Bret: I’d like to start with where the coronavirus stimulus bill, the next iteration stands and the negotiations as of right now.

Mnuchin: Well, Bret, the president and I couldn’t be more pleased with the way the economic plan is working. We’ve injected $3 trillion into the economy.

People thought we’d get 25 percent on unemployment. Fortunately, it never came close to that. We’re now down to 8.4.

But the president and I believe we should do more stimulus. We have about seven and a half million jobs that we need to get back until we’re back to where we were up. And we want to help small businesses, we want to help businesses that are particularly impacted by this, and we’ll continue to work on proposed new legislation.

Bret: So, what’s the sticking point? Does Speaker Pelosi want this, do you believe?

Mnuchin: Well, I think, you know, in my discussions with the speaker, where we’re really stuck is both on certain policy issues but more about more importantly on the top line. The speaker has refused to sit down and negotiate unless we agree to something like a two and a half trillion dollar deal in advance.

Well, let’s — let’s do a more targeted bill now. If we need to do more in 30 days, we’ll continue to do more. But let’s not hold up the American workers and American businesses that need more support.

So on this point here’s the Republican agenda right now, this week in the Senate they’re putting forth a new or perhaps modified skinny bill that could be as low as $500 billion, laughably low to Nancy Pelosi, right.

But what Mnuchin’s saying is, hey, it’s been over five months since CARES Act was passed, let’s do another injection into the economy now on a smaller scale, and then maybe see if we need more in 30 days, of course this would super convenient for Trump to be able to say he got one stimulus now and another next month just a few weeks before the election and while people are filling in their mail-in ballots, but like I’ve been saying here, I just don’t think Pelosi is going to go for this sort of thing with these piecemeal bills, but that’s what Mnuchin is saying the administration is open to, it’s all posturing right now.

Mnuchin was asked later in this interview about the appropriations, continuing resolutions agreement that he and Pelosi came to last week, and he said that they don’t really have a timeline yet as to how far those continuing resolutions would extend, but he was thinking perhaps through early December, well after the election.

And then one last thing before we move on to unemployment, this morning Senator John Barrasso, who is the chair of the Senate Republican Conference, was on Sunday Morning Features this morning and basically called Pelosi a Disney villain, here’s the clip:

Barasso: So to me, this is Nancy Pelosi as Cruella de Vil saying no to paycheck protection for workers and small businesses all around the country, but at the same time, telling one small business that they should open, but only open for her. This is a sign of container for the American workers

Every group needs a villain right, Democrats have Trump, and Republicans have Pelosi.

In terms of unemployment, California has initiated payments to some who have previously certified, payments will arrive this week. 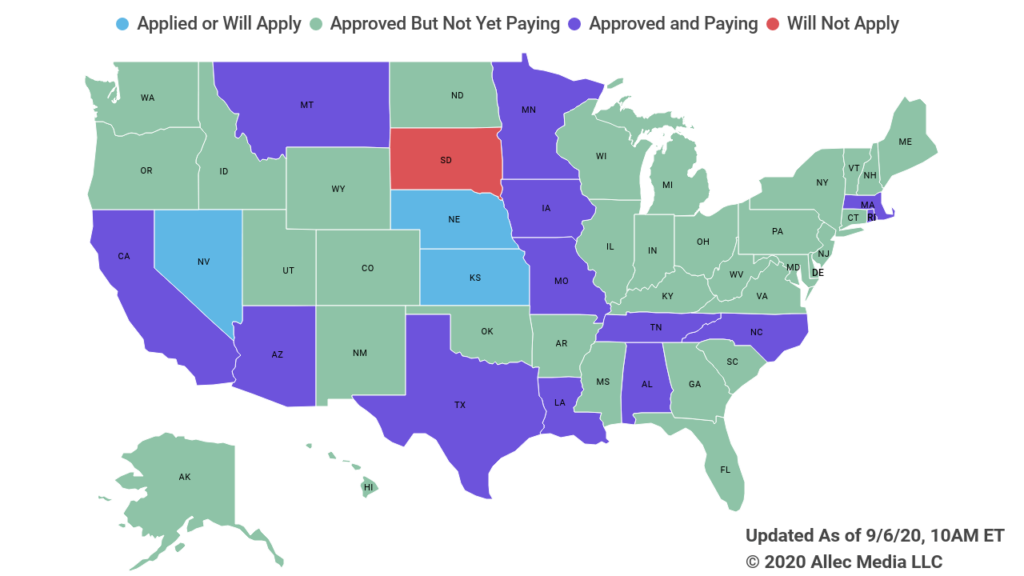 I also created a new map of states’ indications whether they will pay $300 weekly, just the federally-funded amount, or $400 weekly, which of course would involve the state kicking an extra $100 per week. 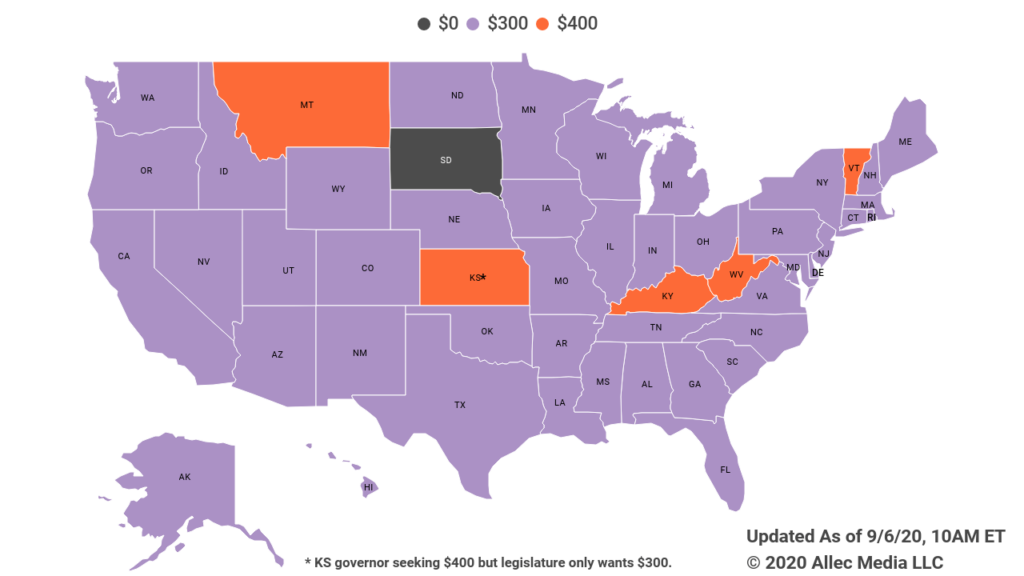 So far, only five states’ governors have indicated the $400/weekly, and those five states are Montana, Kansas, Kentucky, West Virginia, and Vermont.  Of course, just because the governor says $400 a week doesn’t necessarily mean it’s going to happen, the state legislature would have to approve the $100 weekly funding, for example in Kansas, Governor Laura Kelly says she wants the $400 a week, but last week the legislature blocked this request, so, don’t count your dunks before they slam, until the money is in your bank account.