This is my stimulus update for Wednesday, September 9.

Well, we have now seen the new Republican “skinny” bill, and sure enough it bears a lot of similarities to the previous draft that I went over on August 22.  It totals approximately $650 billion but incorporate or claws back $350 billion from previous relief packages including the CARES Act so the net cost would be a mere $300 billion.

This is skinny, nowhere near even one trillion dollars, and as a result it does not include stimulus checks, nor does it include more funding for state and local government.

This is a bill by Republicans and for Republicans.  It has twenty billion for farms, which Chuck Grassley, senator from Iowa and chair of the Senate Finance Committee, has been pushing for.

It has benefits and grants for homeschooling expenses, which we know that people like Ted Cruz have been pushing for.  And McConnell said that a vote will be taken on it tomorrow.

How do we reconcile this?  Well, I think we just have to continue to believe that this new Republican bill is simply the floor so that Senate Republican can say they’re doing something, especially those who are up for reelection, now they can say, “Look, we Republicans put forth this targeted bill, the Democrats wanted their absurd three plus trillion dollar HEROES Act,” and our best hope is that in the course of negotiations stimulus checks get thrown back in there because we know the White House is open to something much bigger than this skinny bill, $1.3 trillion, maybe even $1.5 trillion.

Anyway, this new skinny bill would need the 60 votes for cloture to advance to a final vote, but the #2 Republican Senator John Thune yesterday said that he doesn’t think they’re going to get 60.  It’s just a Messaging bill.

But remember what Meadows said yesterday, he’s more optimistic about a stimulus deal getting done now than he has been in a long time.  But on the other hand, we have Mnuchin saying just today that he’s not sure if a deal will get done.

And frankly, I’m not sure where Meadows’ optimism yesterday comes from, we might just be looking at more presidential memoranda and executive orders as the only form of stimulus in the near future, remember what Trump said about using the $300 billion in an account for stimulus checks because I look at this Republican bill, and I don’t see much.

So What’s in the New Republican Skinny Bill?

It includes liability protection similar to the HEALS Act, I’ve already covered this in a previous video.  It includes unemployment with an extension of the FPUC through the end of the year, but only for $300 a week.  This payment would be retroactive to the week ending August 1 and would last through the week ending December 27.

So if this Republican bill becomes law, that means that for certain weeks, folks would in fact get $600 a week or potentially as much as $700 a week, $300 from the FPUC in this bill plus $300 or $400 from their state for three, four, five weeks, however long the FEMA grant lasts in that state.  And of course while Trump’s memorandum on unemployment was only for those receiving at least $100 a week in normal unemployment, including PUA, this extension of the FPUC would be like the CARES Act where you could be receiving $1 of unemployment theoretically and still be eligible for the $300 weekly payment through the week ending December 27.

This new Republican bill would have a second round of PPP that would only be for business with fewer than three hundred employees and that have experienced a year-over-year revenue drop of at least 35%.  The maximum loan amount would now be two million in this round rather than the previous ten million.

Also, the definition of qualifying expenses on what the PPP loan proceeds could be used and still qualify for forgiveness would be expanded, and there would be an expedited forgiveness process for those receiving loans of one hundred and fifty thousand dollars or less.

There’s forgiveness for a $10 billion loan to the Postal Service, same as the draft skinny bill we saw, check out my video from August 22 for more on how that would work.  There’s money for education, the same $105 billion that we saw in the previous draft of the skinny bill, an expansion of the definition of qualifying expenses out of 529 plans especially for home schooling costs, and also grants for school choice scholarship programs as well as grants to child care providers.

There’s money to beef up our national response to public health emergencies such as the coronavirus as well as an extension of the states’ deadline to use their Coronavirus Relief Fund money from September 30 to December 30 if this bill were to pass.

There are also provisions to make the U.S. less dependent on other countries for critical minerals, as well as various appropriations that made their way in at the end of the bill, mostly miscellaneous, twenty billion for farms, half a billion for fisheries, fifteen billion to help states assist childcare facilities for low-income families, twenty-nine billion for healthcare funding, and various appropriations to fight COVID-19.

As for the Democrats’ response, yesterday Nancy Pelosi and Chuck Schumer issued a joint statement basically ripping into this new Republican bill, stating that it is “laden with poison pills Republicans know Democrats would never support,” I believe that they are very likely referring to the liability protection in this bill there among other possible things, and they go on to say, “Instead of helping state and local workers facing layoffs, feeding hungry families, providing adequate funding for testing and treatment to fight the pandemic, helping renters keep the roof over the heads, stopping the dismantling of the U.S. Postal system and making sure Americans can cast their ballots safely in fair elections this November, this emaciated bill is only intended to help vulnerable Republican Senators by giving them a ‘check the box’ vote to maintain the appearance that they’re not held hostage by their extreme right-wing that doesn’t want to spend a nickel to help people.”

I’m not sure why Mark Meadows felt so optimistic yesterday about stimulus negotiations.  I do not see a bipartisan spirit here among either party unfortunately.

In terms of unemployment, yesterday Washington, D.C. was approved for the FEMA grant, leaving only Nebraska and Nevada as yet unapproved other than South Dakota, which will not apply. 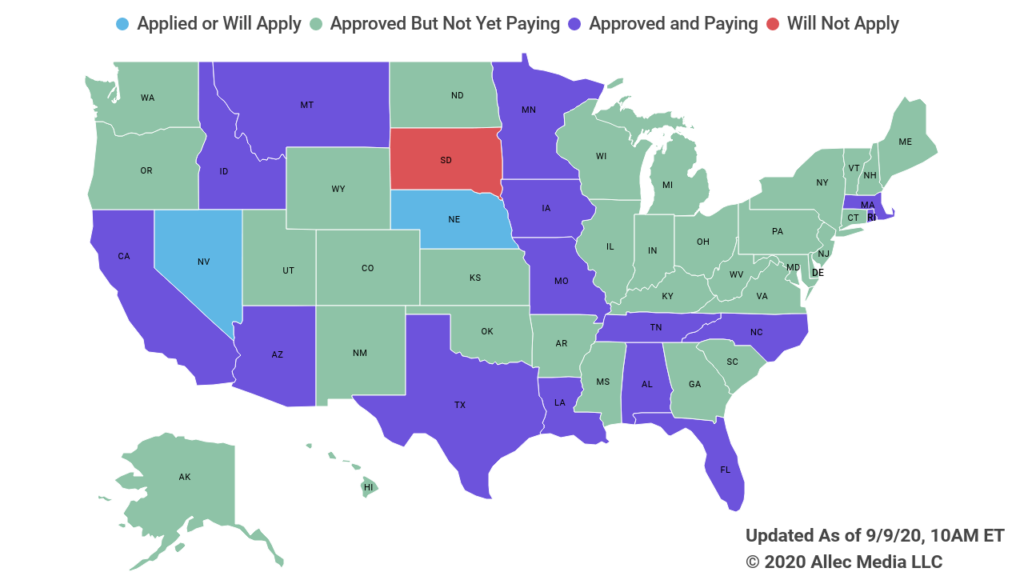 Florida is expected to start paying benefits this week, so now Florida is purple on the map, for a retroactive three weeks’ worth of payments for the weeks ending August 1, August 8, and August 15.