With our Rakuten promo code LOGANA310, you can earn a $40 reward after creating a new account and making your first purchase.

That’s four times more than Rakuten’s current sign-up offer, which provides a $10 reward when you sign up and spend at least $25.

Just use our Rakuten promo code LOGANA310 at sign up or, alternatively, our referral link to get a $40 bonus when you get started with Rakuten.

New Rakuten users can get $40 in extra rewards simply by earning cash back through Rakuten offers.

Continue reading to learn how to use our Rakuten promo code to get your $40 bonus.

This offer is currently available to residents of the United States or Canada.

Keep in mind that you need to be a new member to receive the reward — existing Rakuten users won’t be able to earn a referral bonus.

Rakuten is a cash-back program that enables users to earn rewards while shopping with popular brands including Walmart, Target, Macy’s, Nike, and more.

Every purchase you make with a participating retailer is associated with a set percentage of cash back.

It’s one of the oldest and most widely recognized brands in the space, with close to 25 years of experience since its founding in 1997.

According to the Rakuten website, more than 12 million users have earned a total of over $1 billion in cash back by shopping online and in stores.

You can currently download the Rakuten app on Android or iOS, and it’s also compatible with several major browsers.

There are several different ways to get cash back through Rakuten.

At any given time, you can find cash-back rates for a variety of brands on the Rakuten site.

Orders from most of these retailers were eligible for ten percent back when we visited.

These cash-back rates can change frequently, so make sure to check Rakuten whenever you’re making an online purchase.

Just click on an offer to be redirected to the brand’s store and earn cash back on your purchase.

Some offers come with extra conditions or are limited to specific products.

Groupon, for example, was offering ten percent back in the “things to do” and “beauty, spa, health, and fitness” categories, but significantly lower rates on other purchases.

Different sections of the Rakuten site cover online and in-person deals, so don’t forget to take a look when going to a physical store.

On the Rakuten app, you can see in-store offers on a map of your area. 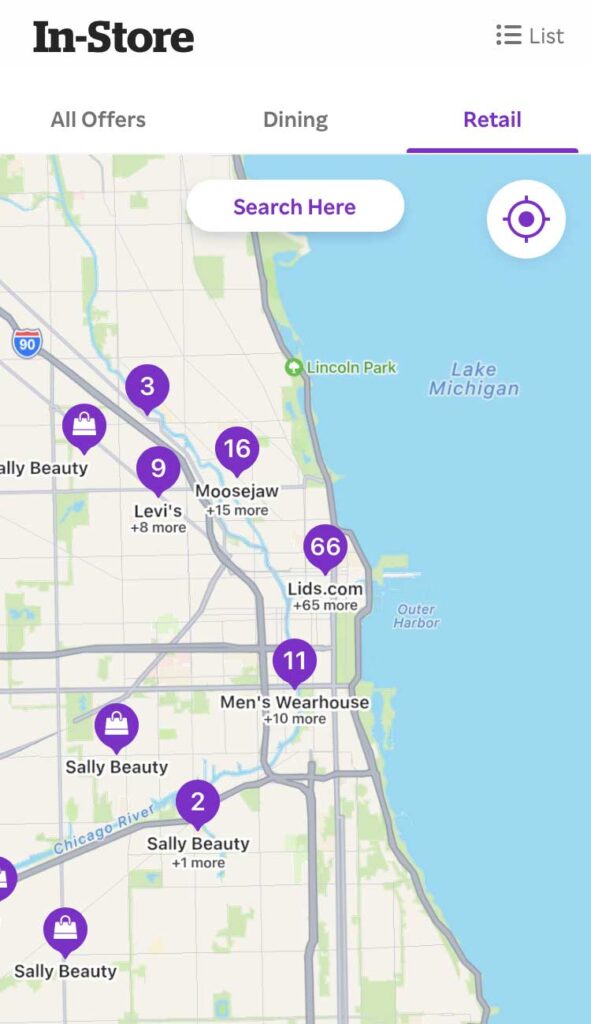 For in-store offers, you’ll need to select the offer in advance, link it to a particular credit or debit card, and use that card to complete the offer at the store.

One thing to know is that the cash back rewards for in-store purchases are usually much less than the rewards for online purchases from the same retailer.

Also, debit cards need to be swiped or inserted as credit cards at the point of sale in order to trigger cash back.

When done correctly, you should sign the receipt after your purchase instead of entering the PIN associated with your debit card.

After you create a Rakuten account, you can refer your friends and family in order to earn even more rewards.

Just give your friends your Rakuten referral code when you invite them to the program.

As of December 2021, they’ll receive a $40 bonus when they sign up with your code and make $40 in qualifying orders within their first 90 days.

You’ll also receive a $40 bonus once they fulfill the referral conditions, and there’s no limit on how many times you can earn that reward.

In fact, members who refer ten or more users to Rakuten gain influencer status, giving them access to exclusive newsletters with information about promotional opportunities.

Rakuten makes it easy to find some of the very best cash back deals with their ever-changing list of Double Cash-Back Stores.

Stores that have doubled their cash-back rate for a limited time are listed on this page. At any given time, the cash-back increase may be even greater.

For example, as of November 2022, Nike was listed as offering 10% cash back, more than six times higher than their usual 1.5% cash-back rate.

Check Rakuten’s Coupons page daily for limited-time offers to get extra cash back or discounts.

These deals can include coupons, higher cash-back rates, and promo codes. 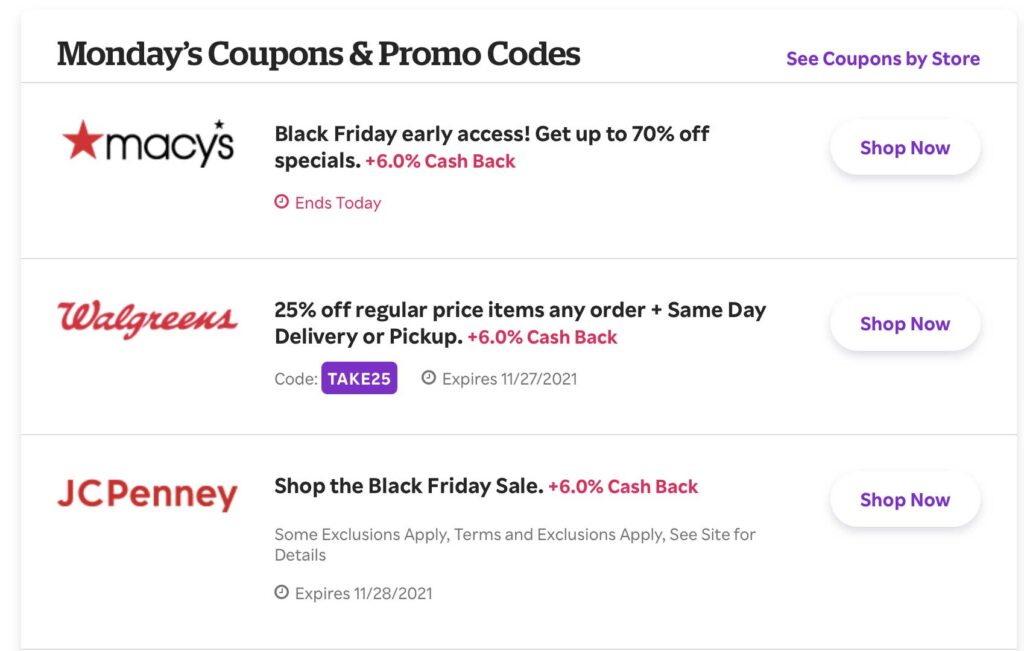 Another way to get more cash back through Rakuten is to sign up for the company’s credit card.

The card is issued through Synchrony Bank, which also manages branded credit cards for Amazon and others.

The Rakuten cash back card has no annual fee.

As a sign-up bonus, you’ll earn $10 once you make your first purchase.

Purchases through Rakuten earn 3% cash back — that’s in addition to any cash back from the retailers themselves.

For instance, if you took advantage of the 10% Nike deal we mentioned earlier, and made the purchase with your Rakuten card, you’d earn an impressive 13% cash back.

Let’s see how cash back from a $50 purchase would compare at various rates from different retailers. (Based on cash back rates published November 22, 2021.)

The 3% cash back Rakuten offers on their purchases is very generous.

However, Rakuten offers only 1% cash back on other purchases.

Their sign-up bonus of $10 is also much lower than you’d get from many other credit cards.

Can I Trust Rakuten?

While it’s easy to be taken in by scams when shopping online, you can trust Rakuten to protect your information and pay out your rewards on time.

It’s one of the largest cash-back platforms in the world, with over 15 million members and more than $2 billion in total lifetime rewards.

The Rakuten mobile app also has an average rating of 4.8 on the App Store and 4.2 on the Google Play Store, indicating that users are generally satisfied with its performance.

Hiroshi Mikitani, the founder of Rakuten, started the business in 1997 to facilitate online shopping in a rapidly growing market.

In the early years, it was essentially an ecommerce marketplace that enabled vendors to sell their products in a custom storefront.

Under his leadership, Rakuten has become a major conglomerate and a leader in many different industries.

Mikitani’s net worth is currently estimated at an incredible $6.35 billion by Bloomberg, ranking him among the top few hundred richest individuals on Earth.

How Did Rakuten Work For You?

If you use our Rakuten referral code, I’d love to hear how you like using the service. Let us know about your experience with Rakuten in the comments to help other cash-back seekers make the right choice.