14 Things to Get Rid of in Your Home Immediately

Over the years, I’ve noticed that I tend to persuade myself that I should keep something I haven’t used in years because I might need to use it in the future.

And somehow, that thing always ends up forgotten and stuffed in the dark corner of the closet or the very back of a drawer.

On reflection, many of the things I didn’t want to get rid of weren’t important at the time, wouldn’t have been important in the future, and should have been thrown away in the first place.

Today, then, in a bid to prevent you from making my mistakes, I’m discussing 14 items that you should get rid of immediately even if you think you might use them in the future. 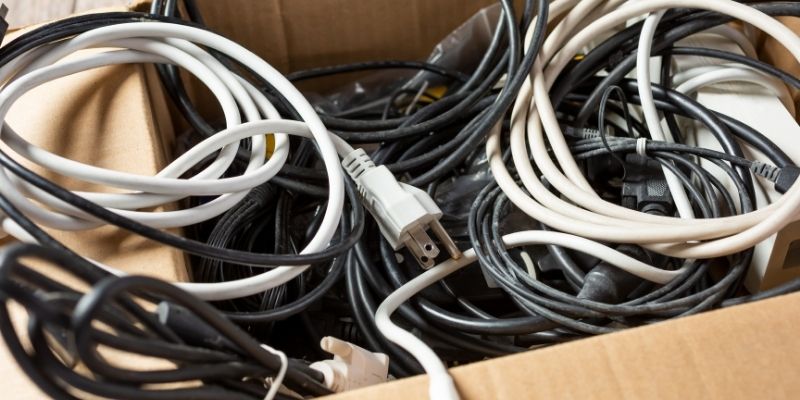 My cord collection is probably a lot like yours- a box of about 50 different cords that match obsolete items- such as Blu-Ray players, DVD players, and old phones- that you threw away several years previously.

And every time you find a cord lying around, you don’t want to throw it away, so you add it to the collection of 25 other cords that you couldn’t match to anything in your home.

In reality, though, unless a cord is non-device-specific or you know exactly what it goes to, there’s usually no reason to keep said cord around; if it’s not important now and/or you don’t know what it’s for, you’re better off just throwing it away instead of adding it to the collection. 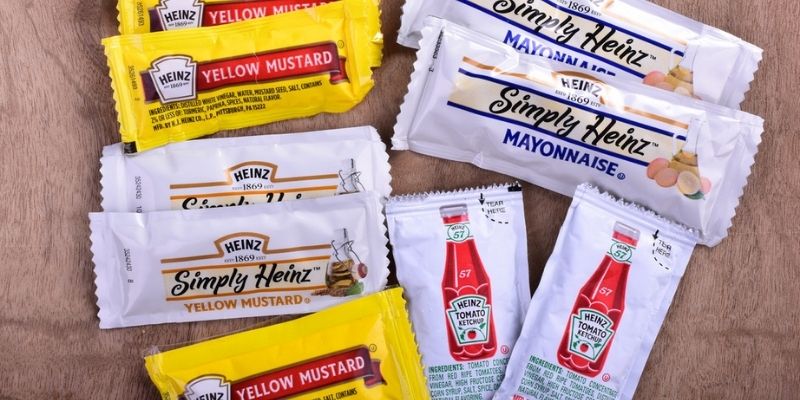 If you get a few sauce packets with your fast food order and don’t use all of them, your natural tendency is probably to save the rest for future use.

And while this makes sense if the packets are going to be used in the next few days, it’s a waste of space to let them accumulate to the point where you have a dedicated “sauce drawer”.

Unless you routinely make use of a particular sauce, it’s probably best to just throw away your sauce packets. 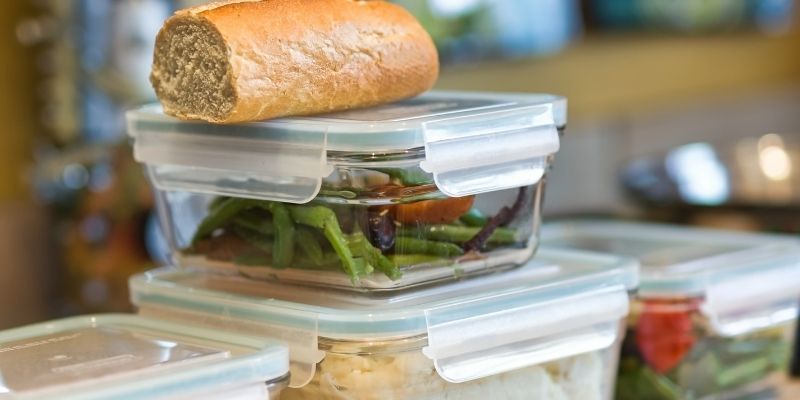 While it’s good to save leftovers to avoid wasting food, many people put leftovers in the fridge, repeatedly decide not to eat them, and then eventually forget about them.

If this is a habit you have, I recommend going through your fridge on a weekly basis, being sure to throw away the food that you’re not really going to eat in the next few days.

Otherwise, you’ll end up with a fridge full of old, moldy leftovers.

4. Anything You Haven’t Worn In the Past Year 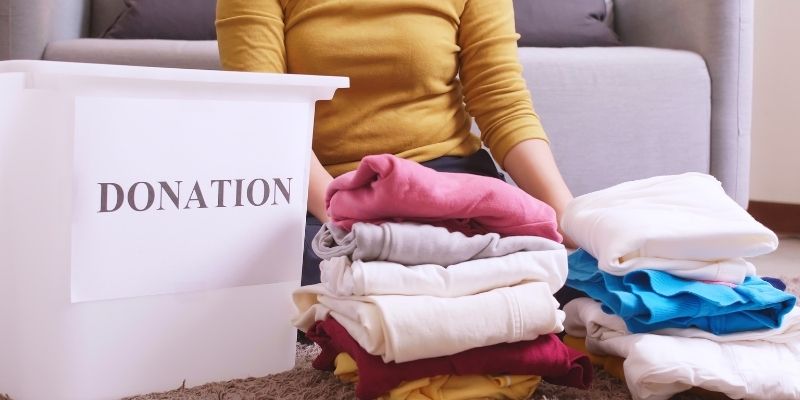 Some people like to have a lot of clothes to pick from, but I’ve personally found that if I haven’t worn something in the past year, I probably won’t wear it in the next year, meaning it’s probably time to donate it or throw it away.

There are a few exceptions to this, but generally, it’s pretty safe to get rid of something you haven’t worn in the last year.

Along the same lines, many people choose to keep the extra buttons their clothes come with.

And although there’s a chance you’ll need that button, you’re eventually going to get rid of the clothing item the button came with, so in most cases, you won’t end up needing it after all.

Generally, unless there’s a good chance you’re going to need a button at some point, there’s no reason to keep it. 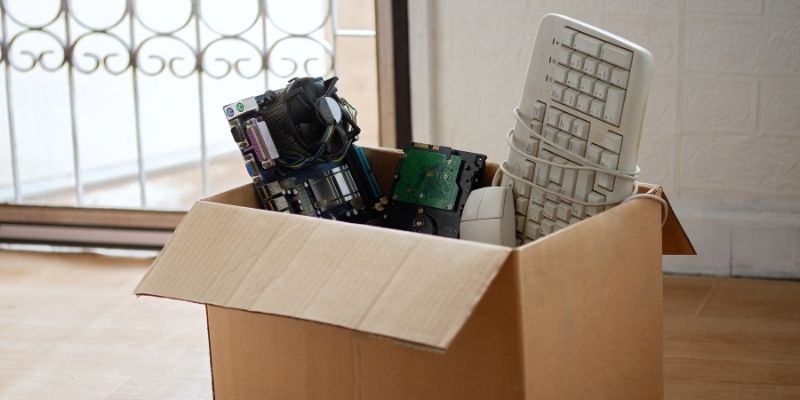 Even if you don’t have any old cables lying around, the odds are that you have a huge collection of old and unused electronic accessories — remotes, mice, keyboards, controllers, etc.

Like with other items, though, if you have a tendency to let these build up, I recommend that you go through your house periodically to rid yourself of any unnecessary and space-occupying accessories. 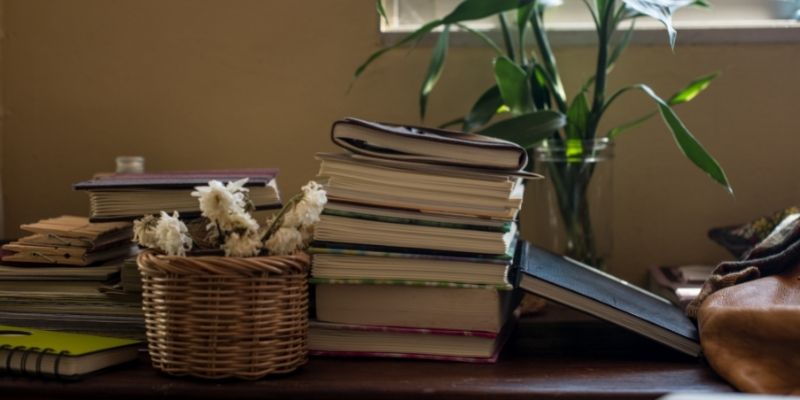 Some people like to have large book collections, and if you have the space, there’s nothing wrong with that.

However, if you don’t have that much space and haven’t ever read (or reread) a physical copy of a book that you’ve owned for a while, you may want to consider whether there’s a realistic chance you’ll ever actually open that book.

Why? If the answer is no, there’s probably someone out there who does want to read that book, which means it may be a good idea to sell it to a used bookstore or give it to someone you know.

On the other hand, if you don’t have time for a book now but may want to read it in the future, you can give it to my friends or family and then ask to borrow it later, when you do have time for it. Either way, the book is getting a lot more use than it would sitting on your shelf- and you’re saving space.

This principle also applies to movies, games, or any other medium that you could give or sell to someone else. 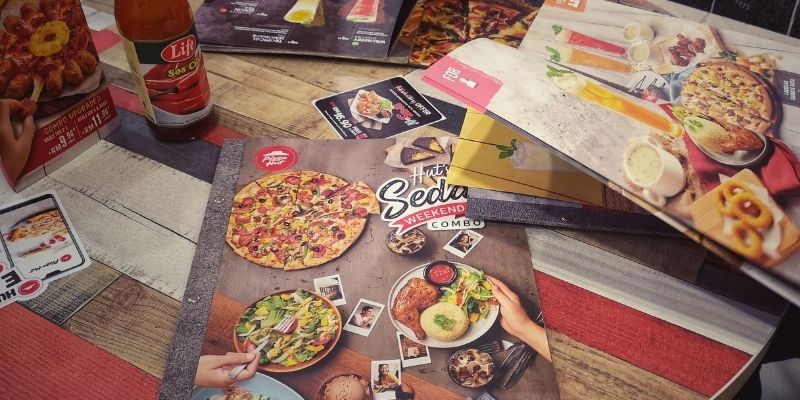 If you live in a city, you’ve probably received numerous physical menus from restaurants, either in the mail or in the bag with your order, in the hope that when you want to order food again, you’ll see that menu lying around and decide to go to that restaurant.

This may have been helpful back when you ordered food over the phone and didn’t have another way to access the menu, but now that you can find the menu online or order through Ubereats or Postmates, there’s no reason to keep a physical menu — you don’t need it to see the menu, and you don’t need it to remember the restaurant’s name.

Rather than putting physical menus away, then, just recycle them immediately and save that space for something else. 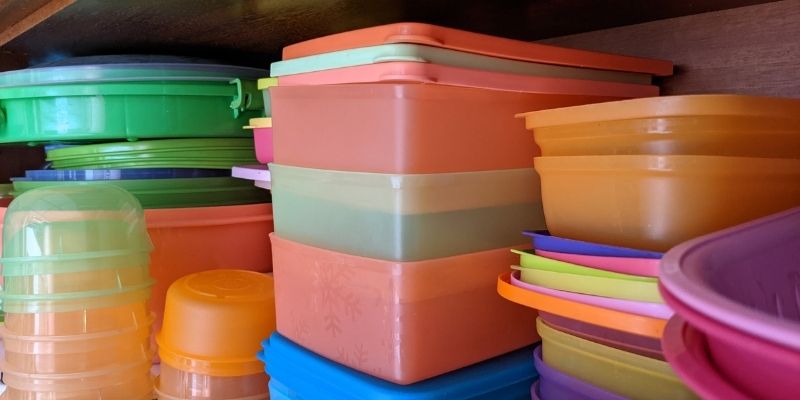 If you lose a Tupperware lid, for example, there’s no reason to keep the container around, and vice versa.\

You might be able to repurpose the container, but if you don’t have a clear idea of how you’ll do so, you’re better off just disposing of it.

This also applies to other items such as pots and pans- if you lose the pot, the lid probably won’t be very useful. 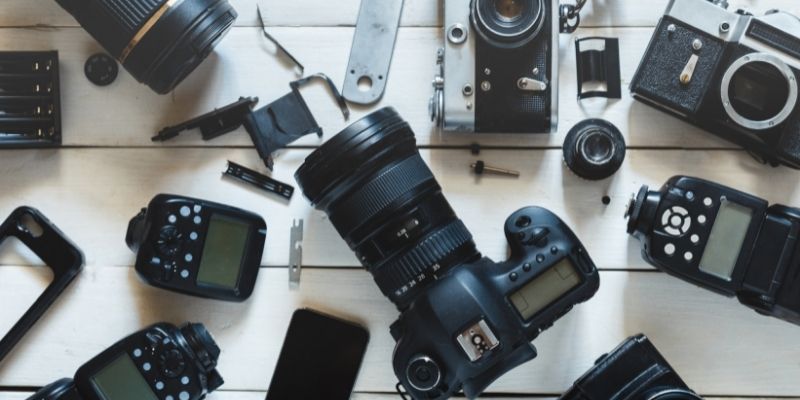 Generally, I don’t have anything against cameras; if you have a high-quality camera that you actually use, you should keep it.

However, if you take 99% of your photos on your phone, you probably don’t need to keep a camera around, especially given the quality of cell phone cameras.

And because good cameras can be extremely valuable, instead of keeping an unused camera, you’re probably better served by cleaning it up, checking its working order, and then listing it on eBay or Decluttr. 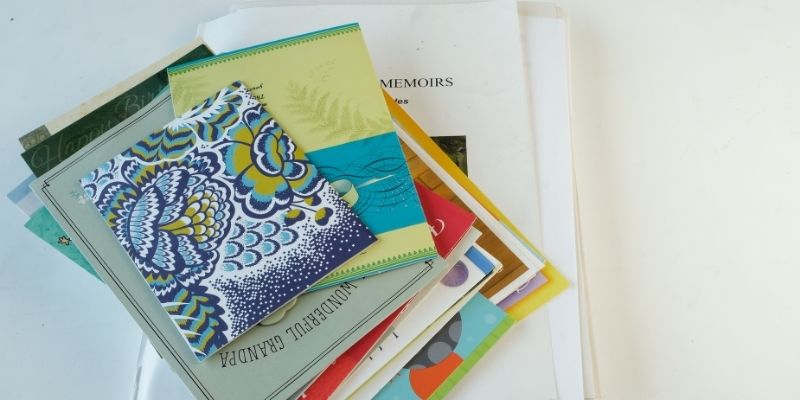 Some people have very strong feelings concerning greeting cards and similar keepsakes, so I don’t want to say that you should never keep them; if something has significant sentimental value, there’s no need to discard it.

On the other hand, you probably don’t need to keep every card you get.

In my opinion, they pile up quickly, leaving you with a big stack of Hallmark cards that serve no practical purpose.

Unless there’s a specific reason you want to keep a card, it’s probably safe to throw it away after a few weeks, taking a picture of it to keep on your phone if it’s that important to you. 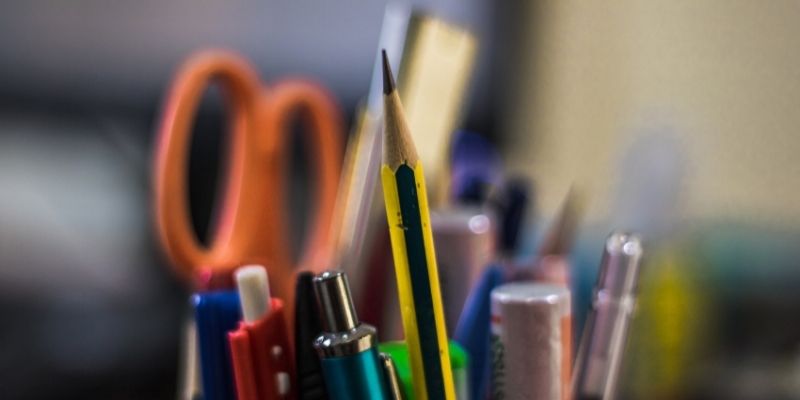 We all know someone who has a thousand pens scattered around their home.

This may seem like a good way to always have a pen on hand, but it, too, is another form of needless clutter, given that most people use electronic keyboards more than pens or pencils.

If you are this person, I recommend that you do a little math to determine how many pens you go through a year and then throw the remainder away; you’ll feel a lot more organized when you only have a few pens in very specific places.

And if a pen no longer functions, throw it away! 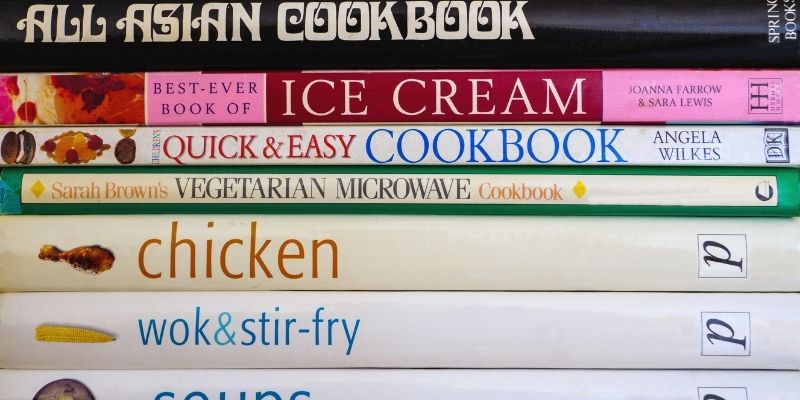 Like many items on this list, cookbooks can feel nice to have around; they can be good decor, and there may be some recipes you want to try.

In the past, too, because of limited access to recipes, cookbooks were the best way to try out something new with confidence that it would turn out well.

Today, though, it’s so easy to find recipes online that you don’t need to keep a physical book on hand.

And in my experience, most people who have cookbooks actually look for recipes online almost every time they want to cook. Even if you want to keep a few recipes on hand, you can easily do so by simply taking a picture of them on your phone.

Therefore, while some people love to use physical cookbooks, most people are probably better off passing those on and simply bookmarking their favorite online recipes on their phone.

14. Anything Cluttering Your Drawers and Cabinets 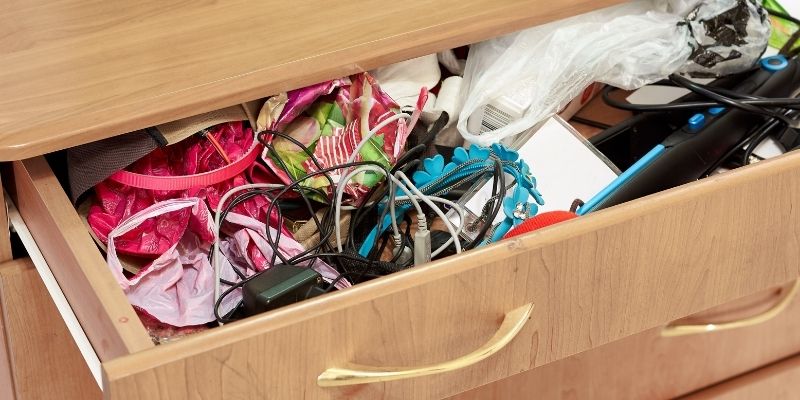 I’ve covered many common items that tend to build up, but ultimately, we all have our own unique clutter.

In my experience, most people usually have an overflow drawer or cabinet where they place items that they don’t need immediately but don’t want to throw away.

Eventually, though, this “overflow” will become more of a contained mess, holding all the odds and ends you didn’t know what to do with.

Therefore, I recommend that you go through your junk drawer every few months, keeping it organized so that you can access the miscellaneous items that you actually need.

Similarly, you should make sure to keep all your drawers and cabinets organized, dedicating each one for a specific purpose so that it doesn’t just contain a bunch of random items that you didn’t want to throw away.