Hey! My name is Logan Allec, CPA, and I own this site. I also have a YouTube channel dedicated to providing you with the best tax relief information as well as my own tax relief company, Choice Tax Relief.

Justice Tax, LLC provides tax resolution services to its customers such as submitting offers in compromise to the IRS and filing back taxes.

That said, there are a few things that you should know before signing up with Justice Tax, as you should with any tax relief company.

In fact, the Federal Trade Commission has a dedicated page on its site just to warn consumers about unscrupulous tax relief companies.

In light of the bad tax relief companies out there, I decided to put on my CPA hat and take a deep dive into Justice Tax and its business practices — here’s what I found.

WATCH the video below to learn how to get your offer in compromise approved to settle your IRS tax debt!

What Is Justice Tax?

Justice Tax is a tax relief company founded in 2000 that claims to have “facilitated over $2.2 billion of financial obligations for over 20,000 individuals.”  I have to question why exactly this amount is phrased in this way; if this was all tax debt, why didn’t they just say that?

Something else that didn’t strike me quite right about Justice Tax is that it does not display the tax professionals on its team.

Its homepage claims that the company has “attorneys, CPAs, and a former IRS agent” with a combined “50+ years of experience”, but there is no indication on the website who these individuals are.

This is different from other tax relief companies that often have a listing of all the tax professionals working at the company.

Justice Tax explains its process in slightly painfully cheesy way by analogizing it in terms of a robot and her robot dog.  I wish I were kidding, but I’m not.  Peep the screenshot below. 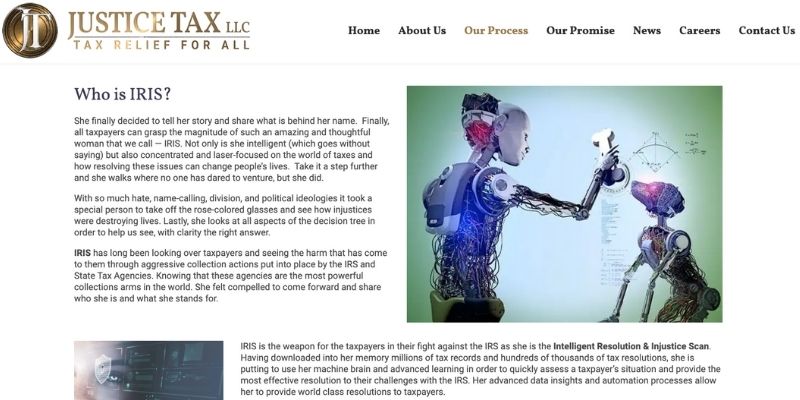 So IRIS is the robot and stands for the “Intelligent Resolution & Injustice Scan”.

On this page, Justice says, “IRIS has long been looking over taxpayers and seeing the harm that has come to them through aggressive collection actions put into place by the IRS and state tax agencies.”  So basically she’s like a female robot Batman but for taxes.

Anyway, here’s the gist of how Justice says IRIS works: “Having downloaded into her memory millions of tax records and hundreds of thousands of tax resolutions, she is putting to use her machine brain and advanced learning in order to quickly assess a taxpayer’s situation and provide the most effective resolution to their challenges with the IRS.”

As for the dog, TASER (Tax Assessment Social Explaining Robot), it apparently is IRIS’s medium of “communicating the complex laws of the IRS in an understandable way to taxpayers.”

Now, I’m not sure how much sense it makes to have the dog character be the one to communicate the IRS rules in plain English in a way that apparently the humanoid robot cannot, but whatever.

All Justice is trying to communicate with these characters is that they can access your tax files (with your permission, of course), they know the tax law, and they want to help you.

Justice has a personal tax problems page that lists out the tax issues it helps people with.  Here it is:

And Justice has a dedicate webpage for each one of these problems.

One issue that I quickly caught, however, is that Justice doesn’t really update these pages too often.

For example, its page on unfiled tax returns has tax amounts from the 2018 tax year.

This isn’t a huge strike since I’m sure that Justice’s tax professionals (whoever they are) do actually know the most up-to-date tax figures, but having outdated information on its website doesn’t exactly help Justice.

Justice also has a business tax problems page that (see the pattern here?) lists out the tax issues it helps businesses with.  Here it is:

Now, maybe Justice Tax does have the bandwidth to handle all of these cases, but in my opinion, some of this stuff — like state unemployment audits — is pretty specialized and generally outside the realm of your typical tax relief firm.

But, who knows?  Maybe Justice Tax really does handle all of this.

On its tax solutions page, Justice Tax lists out the services it provides:

Yup, these are the bread-and-butter services provided by most tax relief companies.  The one that I don’t see on here is getting taxpayers who owe back taxes into currently not collectible status, but I’m sure that Justice Tax does that too.

Before signing up with Justice Tax, you will certainly want to understand how they work.

Justice Tax’s fees are not readily available on its site, but other sites claim that Justice Tax’s average fee is about $3,950.

This is frankly on-par for a typical offer in compromise but might be a little steep for a simpler arrangement such as an installment agreement.

Again, I don’t have this information firsthand, and this could very well just be their typical fee for an offer in compromise, which would be quite reasonable.

Justice claims that it works with people in all 50 states, so you shouldn’t have any problem working with them based on where you live.

It’s typical for tax resolution companies to not work with people unless they owe at least $10,000 in back taxes, but Justice doesn’t mention this anywhere on the site, so it seems that Justice is rather accessible compared to other tax relief firms.

Nowhere on Justice’s site (that I could find) does it indicate anything about a money-back guarantee.

Throughout its website, Justice Tax has a link that takes you to a form on its website that asks you for:

Your free consultation will likely be with a Justice Tax salesperson.  On this call, the salesperson will listen to your situation and do their best to explain to you what Justice Tax could possibly do for you.

As with any tax relief firm, watch out for salespeople that promise the moon.

Before you’re sold on a promise that they can get a tax settlement with the IRS or other tax authority for you, make sure you understand the rules so you have an idea of what’s possible for your situation and what’s not possible.

Obviously, Justice Tax doesn’t work for free.  At the end of your free consultation, you will likely be encouraged to sign up for Justice Tax’s services and pay by credit card.

While you won’t know exactly what you’re going to get with Justice Tax until you work with them yourself, the next best thing is seeing what others have to say about its service.

On its about page, Justice Tax has some testimonials that I would bet are fake.  Why do I think they’re fake?  Three reasons:

Naturally, the image used is called “testimonial-man-3”, which screams authenticity.

And a reverse image search quickly revealed that this image is, in fact, a stock image.

The same is true for other “testimonials” on Justice Tax’s about page.

This is obviously dishonest and significantly affected Justice Tax’s honesty score in this review. 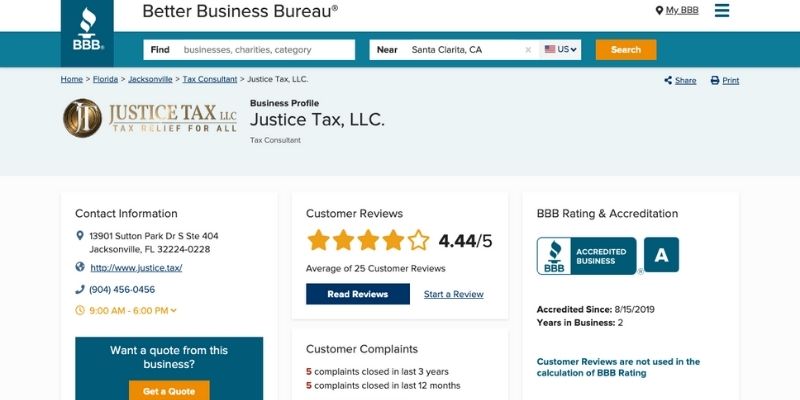 And while most of the ratings are positive, there is one from Barry N. that caused me some concern.

Barry says that Justice Tax charged them $5,000 upfront approximately nine months before he wrote his review and since then there has been no indication that Justice Tax has done anything on their case.

This is exactly one of the things that concerns me about large tax relief companies: The company saying what it takes to get the sale but then putting the client on the back burner.

This review and others like them significantly affected Justice Tax’s responsiveness score in this review.

Here is a summary of the pros and cons of working with Justice Tax.

Happy Customers: Although online review sites are notoriously plagued by fake reviews, there did appear to be some genuine customer testimonials on the BBB website attesting to their happiness with Justice Tax’s service.

Lack of Transparency: There are no people on the Justice Tax website.  It’s certainly not clear who owns the company or who the tax professionals they have on-staff are.  Also, Justice Tax’s fees are not disclosed on its website.

No Money-Back Guarantee: In an industry rife with bad actors, it’s always a little concerning when a tax relief shop does not offer a money-back guarantee.

Where is Justice Tax Relief located?

Justice Tax Relief services clients nationwide, but it is headquartered in Jacksonville, Florida.

How long does Justice Tax take?

Various customer reviews paint different pictures.  Some customers appear to have had a quick resolution to their tax issue when working with Justice Tax, while others complain that Justice Tax appeared to sit on their file for months without taking action.  Suffice it to say that your mileage may vary.

Of course, a different issue is how long the IRS or state tax authority takes in processing the documents that Justice Tax sends them — this could be a very long time (sometimes over a year) and is outside of Justice Tax’s control.