Tax Defense Network, a tax resolution firm based in Jacksonville, Florida, boasts that it has consulted on over $23 billion of tax debt and helped thousands of taxpayers find relief.

But do the company’s services actually measure up to its sales pitch? After all, tax relief companies are notoriously known for promising to reduce or eliminate your tax debts without investigating whether you actually qualify for such relief. In many cases, these companies fail to settle the debt and/or send in the necessary paperwork to the IRS to request this relief on behalf of their clients.

In light of these circumstances, I decided to do a deep dive into Tax Defense Network’s services and what its former customers are saying about the company. Below is what I found.

How Does Tax Defense Network Work?

Tax Defense Network lays out a three-step process on its website for resolving your tax debts:

Tax Defense Network’s process is that much different than its tax relief competitors, but I was struck by how vague the company is in describing each step in the process.

Does the client have to pay the entire fee after the consultation phase or after Tax Defense Network presents the options for resolving his or her case?

What’s the difference between the second and third step?

Does the second step involve notifying the IRS of the company’s representation and taking immediate actions such as stopping bank levies and wage garnishments?

Tax Defense Network’s vagueness is an ominous sign for any potential client who will likely be forking over thousands of dollars for the company to handle their tax debt case.

In any event, the company’s process can be broken down into the consultation, investigation, and resolution phase.

To retain Tax Defense Network’s services, you must first submit a request for a free consultation with a “trained tax professional” who will evaluate and lay out the options for resolving your case.

This professional will, however, likely be a salesperson trained to pitch you on tax debt reduction or elimination, even if they lack the necessary credentials or experience to evaluate the merits of your case.

Indeed, this is implied by a number of customer reviews and complaints.

For example, in one complaint filed with the BBB, one former client claimed that the company’s “sales pitch was that they would stop letters from the IRS, wage garnishments, levys [sic], liens, etc.”

According to the client, Tax Defense Network ultimately failed to do “anything to resolve our problem” despite charging over $10,000 in fees, leaving the client with a tax lien on her house and a levy on her husband’s income. 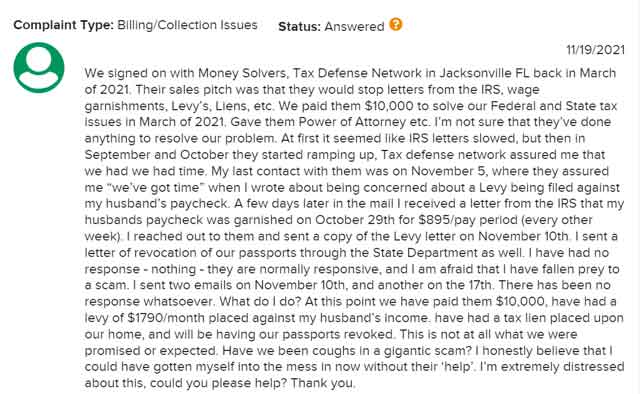 The client’s experience goes to the heart of what is wrong with many tax relief companies – that is, the disconnect between what salespeople are promising and the results that their tax practitioners are able to deliver.

If you retain Tax Defense Network’s services (and pay its fees), the company will begin working with the IRS (or state tax agency) on your behalf.

Representation before IRS (or State Agency)

In this phase, Tax Defense Network claims that it will turn “personalized recommendations” into “reality” as “we work with the IRS and state agencies on your behalf.”

The company is saying the right things, but it is not entirely clear what Tax Defense Network is doing at this stage. Will the company take actions which require immediate attention like stopping bank levies and wage garnishment? Or is Tax Defense Network merely informing the IRS (or state agency) of its representation of your case?

What is equally troubling is that there is little mention of the company’s initial investigation into the merits of your case before agreeing to represent you before the IRS (or state tax agency).

In many cases, you must meet highly specific criteria to qualify for certain IRS relief programs such as an offer in compromise. Therefore, a proper evaluation of the merits of your case is critical to (i) managing the expectations of clients and (ii) effectively representing your case against the IRS (or state tax agency).

During the resolution phase, Tax Defense Network boldly claims that a case advisor will “do what it takes” to resolve your case or “find a solution to get your life back on track.”

The customer reviews, however, seem to undermine this claim. In particular, two general themes emerge from the reviews. First, former clients complain of poor communication with the company once the fee is paid. For instance, in one review, one client claimed that two representatives “ghosted” her for months; she had to leave countless emails and voicemails in order for someone to provide an update on her case.

Several reviewers on BBB also claimed that, upon receiving its fee, the company failed to advance their case with the IRS and/or made careless errors in the course of its representation. For example, one customer who worked with Tax Defense Network for 3 years complained that she “[n]ever could get the help or response needed” despite paying thousands and believed “[t]hey will take the money quickly and don’t do a thing.” Ultimately, upon receiving an IRS levy on all her assets, the customer reached out to the Service and negotiated an affordable installment payment plan herself.

In another review, a client complained that the IRS received a levy due to the company’s untimely handling of her case. The client also claimed that the company erroneously assured her that, under its negotiated installment plan with the IRS, the monthly payment would be $430, when the actual payment was $1,650 per month.

Again, these reviews suggest that the company’s quality of its services is far below the promises its representatives make in the initial consultation phase.

How to Qualify for Tax Defense Network

If you want to retain Tax Defense Network’s services, you must first request a free consultation with a “trained tax professional.”

Tax Defense Network does not disclose the minimum tax debt for the company to work with you, although third-party sites indicate the threshold is between $5,000 and $7,500, which is relatively lower than its competitors.

Apart from this minimum debt threshold, the company does not appear to have any other specific requirements.

Tax Defense Network At a Glance

The company also offers tax preparation (including back tax filings) and bookkeeping services.

The company does not disclose the fees on its website. Based solely on customer reviews on BBB and TrustPilot, the fees are as follows:

Tax Defense Network does not appear to charge an initial investigation fee to properly evaluate your tax debt case.

Based solely on customer reviews, the fees can range from $3,000 to $7,000, which is in line with other tax relief firms. That said, the same reviews show that clients were generally dissatisfied with the quality of services, considering the thousands they paid for help with their tax case.

How Much Could You Save with Tax Defense Network?

The amount you can save with Tax Defense Network depends on your specific tax case.

On its website, the company advertises that it has helped its clients meaningfully reduce their tax debts with the IRS (and/or state tax agency). Several reviews, however, paint a different story of the company failing to do anything for their case. Ultimately, the clients in the majority of these reviews ended up in a worse position than they were before they reached out to the company.

Based on my research, it does not appear that Tax Defense Network has a refund policy/money back guarantee.

Although Tax Defense Network has a BBB rating of 4.54/5.00, the company also has several negative reviews and 200+ filed complaints with the BBB over the last 3 years. Below is a representative sample of the negative BBB reviews:

Below is a comparison of Tax Defense Network’s services with other established tax relief companies:

Is Tax Defense Network Worth It?

In my opinion, Tax Defense Network is not worth the time or money.

Although the company had some good reviews, several former clients complained that the company was not responsive and made material errors in the course of representing their case.

Who Tax Defense Network Is Best For

Tax Defense Network is best for people who have a relatively simple tax debt case which does not require as much attention and follow-up with the IRS (and/or state tax agency).

Who Tax Defense Network Is Not For

Tax Defense Network is not for people who have complex tax cases spanning several years. Most of these cases require tax professionals with the experience and bandwidth to steer the case to a successful resolution, both of which the company does not appear to have, based on numerous customer reviews.

Learn More
Back to top