Oportun is a newer lender in the personal loan space that allows customers to borrow up to $10,000 at a much better rate than what a payday loan lender would offer.

They might offer larger loan amounts, but are they worth it?

We’ve researched Oportun and put together everything you need to know about them in this Oportun review.

Oportun is a personal loan lender and credit card issuer that gives customers the ability to borrow between $300 and $10,000 for as long as 48 months.

They provide much larger loan amounts and longer terms than most app-based lenders that have gained popularity as of recently.

It’s fast and easy to get accepted for an Oportun loan, but there’s a good chance they’re not available in your area, as they only originate loans in 12 states.

Oportun offers quick access to large sums of cash, making them a somewhat reasonable option if you find yourself needing cash for a car repair, medical bills, or other emergencies.

Their loans give you the opportunity to finance over the course of several years for a fairly reasonable interest rate, making them a better option than payday loan lenders.

Oportun also offers a credit card product that gives borrowers access to a line of credit of up to $1,000.

Although the maximum credit limit isn’t very high, on a surface level, this card seems like a decent card to build credit with.

Additionally, Oportun also has a bunch of informative articles where customers can learn some of the basics of personal finance.

Oportun At a Glance

Oportun received a 4 / 10 when it comes to APR because the rates that they charge customers can be quite high, especially for those who have less than stellar credit.

Although their rates aren’t nearly as high as a payday loan, they are higher than credit cards and app-based lenders, like Earnin.

Paying as much as 35.99% for a personal loan can be incredibly detrimental to your personal finance. 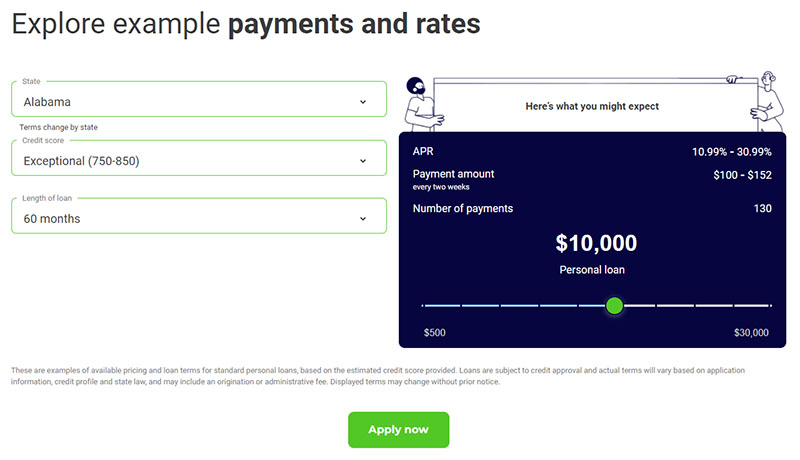 Let’s look at a real-life example of just how much an Oportun loan would cost.

For the sake of this example, let’s say you borrow $1,000 from Oportun for just one year.

This is why we always dissuade people from taking out any unnecessary debt and seeking out low-interest rates on any necessary debt.

If you could get away with using a paycheck advance app, like Earnin, you wouldn’t be charged any interest, meaning you could put $360 back in your pocket!

When it comes to fees, we gave Oportun a 5 / 10, simply because it doesn’t seem like they charge many fees.

However, they aren’t very transparent about how much they charge for each fee.

For example, we know that Oportun charges a late fee, but this late fee varies by state.

This makes them incredibly difficult to rate in this category.

We did do a bit of inferring based on customer reviews though.

Typically it’s very easy to tell when a company is charging very high fees, because there will be plenty of disgruntled customers leaving reviews about said fees.

In the case of Oportun, we didn’t see many of these reviews, so it’s probably safe to assume their fees are reasonable.

However, if you were to apply for an Oportun loan, be sure to read the terms, and see what fees they charge, and how much they charge.

Oportun got a 4 / 10 in the transparency category for the same reasoning mentioned above in the “Fees” category.

They simply don’t publicly disclose much about the fees that they charge.

From a business standpoint, this is somewhat reasonable, given that certain fees are likely capped at different levels on a state by state basis.

However, from a consumer standpoint this is incredibly frustrating. We would like to know exactly what they charge to know whether or not it’s worth the time submitting an application and having our credit ran. Knowing what fees are charged is incredibly important for the average consumer!

The 5 / 10 rating we gave Oportun in the flexibility category came from their overall average flexibility.

Much like any other bank issued loan/credit card, they run a customer’s credit to determine their eligibility.

It doesn’t seem like they accept alternative documentation in lieu of a credit check (like most app-based lenders do).

It would be nice to see them accept this kind of information for shorter term loans – this would make them more competitive with the aforementioned app-based lenders.

We gave Oportun a 5 / 10 in the funding speed category, simply because funding within 1-2 business days is very average.

This is a timeframe that the vast majority of lenders offer.

Although there have been customer reviews mentioning they received funding on the same day as acceptance, this doesn’t seem to be a company wide policy, which is something we’d love to see.

Oportun received a 4 / 10 when it comes to accessibility simply because they don’t originate loans in every state.

As of the time this article is being written, there are 13 states where Oportun won’t originate loans.

Not issuing loans in every state seriously puts a damper on who can access your products.

It is important to note though, that it seems they have been ramping up the number of states they issue loans in.

While doing research for this article, we found claims of Oportun only issuing loans in 12 states from a couple of years ago.

Increasing coverage from 12 to 37 states is quite the increase over just a couple of years.

If you are in a state where Oportun does not issue loans, you may want to check back every few months and see if they’ve added support for your state.

As we’ve mentioned before, Oportun does have a couple of other features.

The first of which is their credit card.

Although they say things like “Accepted Worldwide” and “Zero Fraud Liability” in their advertisements, these are fairly common amongst US credit card issuers, so they really aren’t huge selling points. 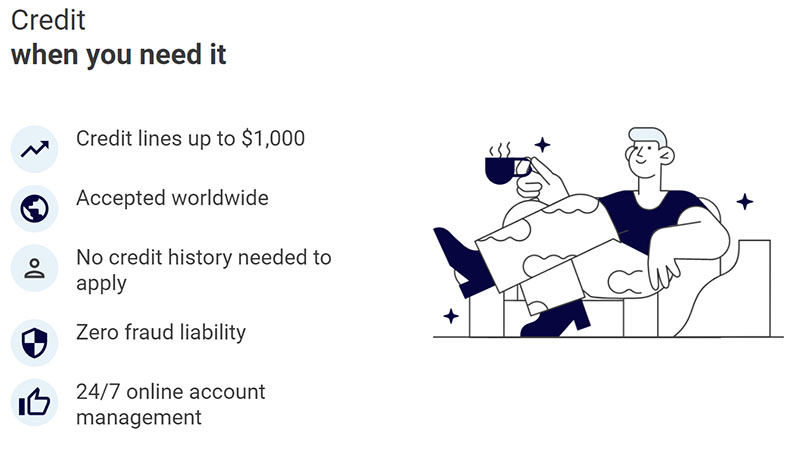 At the end of the day, the Oportun credit card seems like a halfway decent option if you’re looking to build credit, however, it doesn’t seem to offer much to those with established credit.

Lastly, Oportun also has a financial education section on its website.

We really love this, because many lenders out there do not provide any information to their customers on how to grow and prosper financially.

While Oportun by no means offers the answer to every financial question, they do have some good basic financial information that everyone should know. 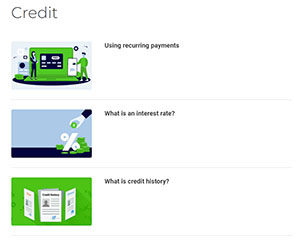 How to Apply at Oportun

If you like what you’re reading about Oportun, and want to apply, we’ve put together a step by step guide on how to apply below:

Step 1: See if Oportun is Available in Your Area 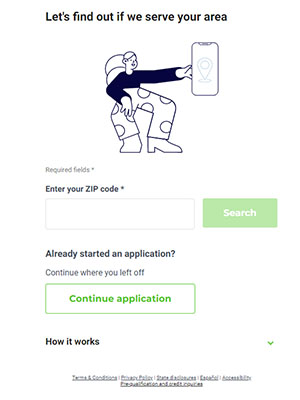 Enter your zip code to see if Oportun originates loans in your state. 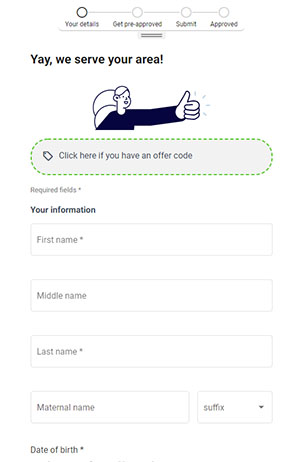 Enter your name, date of birth, and other personal information.

Step 3: Select Your Purpose for Applying for the Loan 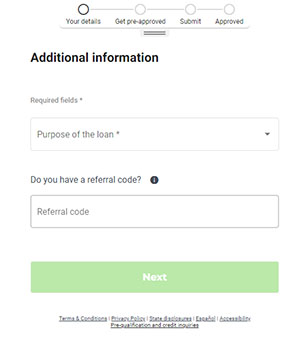 Select one of the prewritten options for the purpose of your loan. 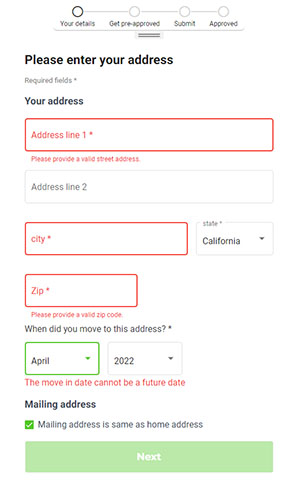 Step 5: Enter Your SSN or ITIN Number and Your Monthly Pay 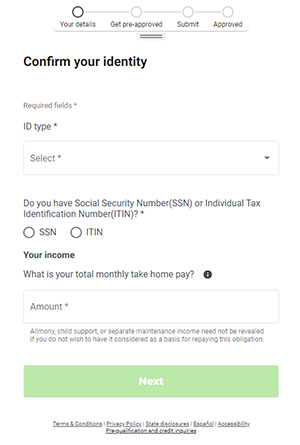 Your SSN/ITIN and monthly income will help Oportun evaluate your maximum loan amount as well as the interest rate you will be charged.

Submit your application and wait for a response.

If approved, enter in your bank details, and get access to your loan in as little as one to two business days.

On the surface, Oportun seems like it has the potential to be a good source of cash when you’re in a pinch, it’s important to see what actual customers are saying about Oportun.

In order to do so, we’ll be taking a look at Oportun’s Better Business Bureau Page.

For those who aren’t familiar with the BBB and how they evaluate the companies listed on their site, we’ve summarized a couple of their key metrics below:

In the case of Oportun, they are accredited with the BBB and they have an A+ rating.

When it comes to customer reviews, Oportun has received 87 reviews with an average score 2.79 / 5. Believe it or not, the A+ rating and customer score above 1 / 5 is a good indication for the company, as most lenders receive much lower scores on both metrics. 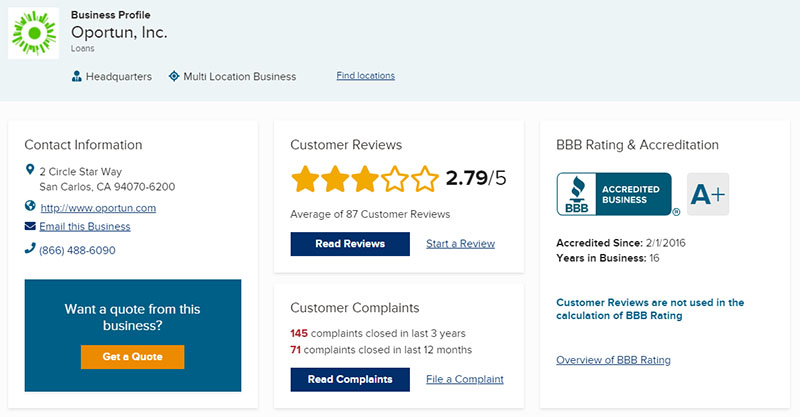 To dive a little deeper, we’ll take a look at some individual reviews, and give our take on the issues that customers are facing.

Oportun is undoubtedly a legitimate company.

Although there are plenty of shady characters in the financial business, Oportun doesn’t seem to be one of them.

They seem to have plenty of happy customers according to their reviews, and they have been accredited by the Better Business Bureau.

In order to help you make your decision on whether or not Oportun is right for you, we’ve laid out some of our favorite (and least favorite) things about them below:

Who Oportun Is Good For

Oportun is good option for someone with a great credit score that needs some extra cash to get them through a tough time.

Those with great credit scores will likely pay a lower interest rate, making Oportun an affordable option for getting cash fast.

Who Oportun Is Not Good For

Oportun is probably not a great idea for someone with less than stellar credit, who needs a smaller amount of money.

If your credit score needs some work, chances are that you’re going to be charged a pretty high interest rate.

In this case, you might be better off seeking out funding from an app-based lender, that way you won’t be charged any interest at all!