TaxRise is a relatively new company in the tax relief space, having first opened its doors in 2017. Despite its short history, the company claims it has helped its clients save over $132 million in tax debts and has leveraged cutting-edge technology to revolutionize the tax relief process.

But does TaxRise’s tax resolution services match its rhetoric? To find out, I decided to do some in-depth research on the company’s services and customer reviews. Below is what I found.

TaxRise advertises a two-phase process for resolving your tax debts on its website: 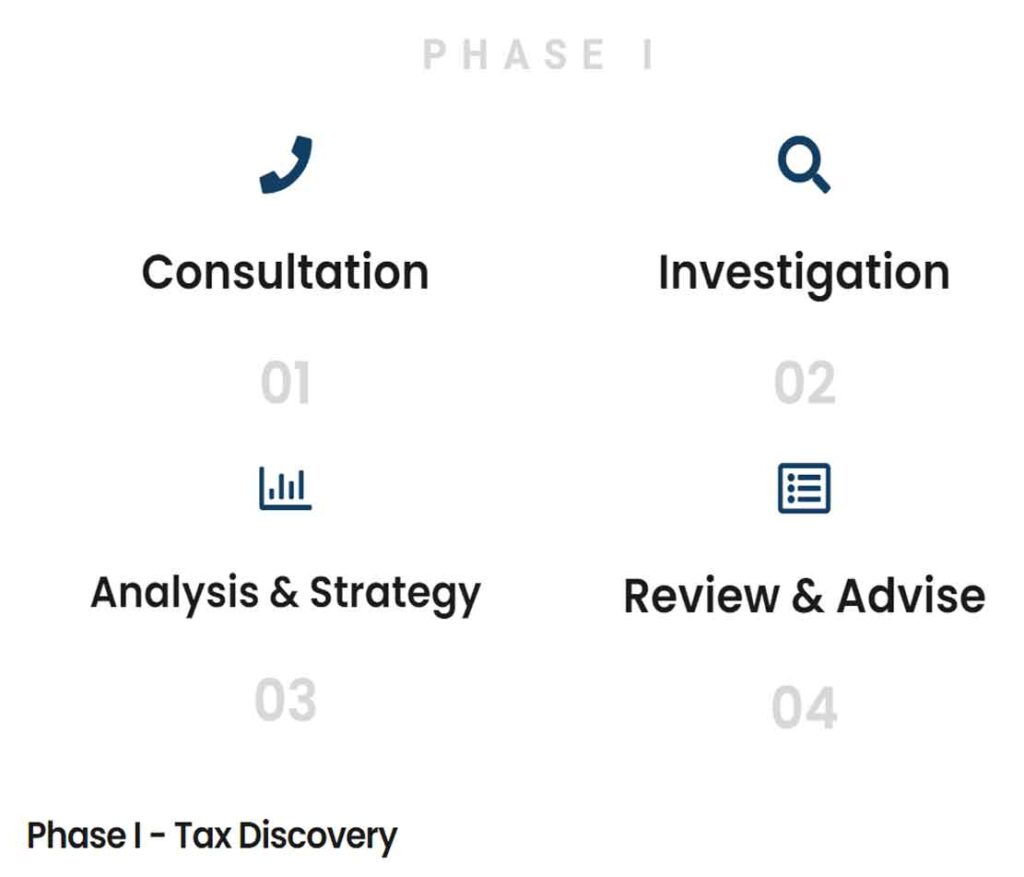 The process involves a tax discovery and resolution stage, which are described in further detail below.

If you want to retain TaxRise’s services, the first step under the tax discovery phase is requesting a free consultation with one of the company’s “tax experts.”

Based on the website, this expert will be able to determine your eligibility for tax relief within 15 minutes and explain the next steps in your case. After initial contact, a so-called “tax investigation specialist” will obtain your IRS file/notices and determine the options best suited for your case. This investigation will supposedly culminate in a “case discovery analysis,” where a tax resolution specialist will determine the best option forward, which he or she will review with you and present for your approval.

TaxRise’s approach does sounds thoughtful and professional, but the client reviews seem to undermine this impression..

For example, one former client claimed that, in the initial stages, “[t]hey will go above and beyond to reassure you that you are an excellent candidate for the fresh start initiative and list why.” However, she cautioned that the “tax experts” are “trained well to hook you.” Specifically, upon signing with TaxRise, the client found a “highly disorganized” company where it was hard to reach anyone, where the database to upload documents was constantly malfunctioning, and where the company frequently sent automated emails/texts with erroneous schedules and times. Ultimately, the client claimed that he paid a $7,500 fee to the company just to get on a payment plan with the IRS. 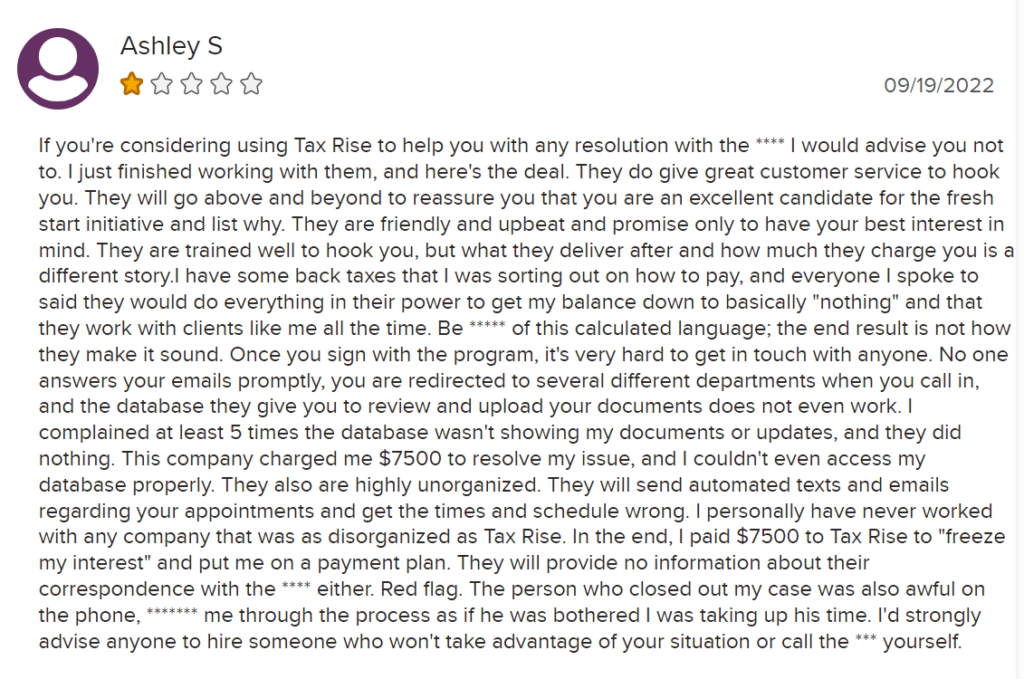 I have no way of knowing whether Ashley’s claims and others like it are accurate. However, if her review is true, her experience contradicts TaxRise as a competent and thorough tax relief firm. Rather, her review paints a picture of a company that will do and say anything to get you to sign up for its services without actually delivering quality tax resolution services.

Once you approve the proposed option for your case, the next step in the process is the tax resolution phase. During this stage, the company claims it will file any past-due tax returns and submit the proposed resolution to the IRS. The company will also supposedly detail your post-resolution tax obligations to ensure your continued compliance with the IRS.

Again, these steps seem sensible, but several client reviews do not back up the company claims. In one review, for instance, one former client complained that “[the company] mislead[s] you about the very small chance of getting the tax savings program.” Despite the company’s promises and paying $4,000 in fees, the client claimed that all the company did was propose an installment plan that the client could have done himself.

Mwandishi’s experience, if true, is a far cry from what the company promises during the tax resolution phase. His review also suggests that the company invests substantially in salespeople to get you to sign up for its services rather than prioritizing the quality representation that is needed to successfully resolve your case.

How to Qualify for TaxRise Relief

As mentioned above, the first step in the process is requesting a free tax consultation with TaxRise to go over your case.

Based on its website, TaxRise requires a minimum tax debt of $5,000 to work with you, which is relatively lower than its competitors.

Beyond that, the company discloses no other requirements on its website.

TaxRise provides similar tax resolution services as its competitors, including the following:

The company also offers tax preparation/compliance (including back tax filings) to individuals.

TaxRise does not disclose the estimated costs of its services. Instead, the company includes the typical disclaimers on its websites that fees are determined on a “case-by-case basis” and dependent on your tax liability situation and the relief program you pursue.

However, based on client reviews, the estimated fees are as follows:

The company charges a “discovery analysis” fee of approximately $500. This fee covers the company’s initial review of your case and evaluation of the best option to resolve your tax debts.

Based on several client reviews, the total resolution fees ranged from $2,700 to $7,500, which is generally in line with the fees at other tax relief firms.

Despite this, many clients reported being scammed by the company and believed that TaxRise was ultimately not worth the money. In addition, in at least two reviews, the clients claimed they were quoted resolution fees of $12,000 by the company.

How Much Could You Save with TaxRise?

The amount of money you can save with TaxRise depends on your specific tax debt case.

On its website, the company advertised that it was able to substantially reduce its clients’ tax debts.

However, several reviews on the BBB website paint a different story. Specifically, the former clients in these reviews claimed that the company did nothing to advance their case once the fees were paid or negotiated an installment plan that they could have done themselves.

TaxRise has a 3.79 (out of 5.0) rating on BBB, but has a number of negative client reviews. Notably, the company has responded to and closed 200 complaints over the last three years. Below is a representative sample of the negative reviews on the BBB website.

On its website, TaxRise provides a money back guarantee if the company does not enroll the client in a tax resolution program. As currently stated, the guarantee is quite vague. Does a “tax resolution program” include an installment plan? If so, the company is arguably not guaranteeing anything at all, given that it is somewhat easier to get the client on an installment plan with the IRS (or applicable state tax agency).

Below is a comparison of TaxRise and other established tax relief companies:

In my opinion, TaxRise is not worth the money.

Several reviewers commented on the company’s poor client service and lack of expertise to actually steer the clients to a successful resolution. Additionally, based on a number of reviews, TaxRise employed aggressive marketing tactics and oversold what clients could qualify for without actually properly vetting their cases.

Who TaxRise Is Best For

TaxRise is best for clients who have simple cases, low tax amounts and prefer a more hands off approach on their case.

Who TaxRise Is Not For

TaxRise is not for individuals who have more complex cases with high tax debts. Based on a number of reviews, the company lacked the expertise and/or resources to respond to client inquiries and provide quality representation before the IRS (and/or state tax agency), which could potentially put you in a worst position than before (e.g., interest/penalties continue to accumulate while the company is ignoring or mishandling your case).

As mentioned above, several former clients complained about TaxRise’s poor client service and lack of expertise at resolving tax debt cases. If these client reviews are accurate, these negatives any positive attributes of the company.

Steve Ching, J.D., covers tax topics for Money Done Right. He is a practicing tax attorney and also has several years of experience at national accounting firms. Steve is passionate about writing and helping people understand and resolve their tax issues.

Learn More
Back to top