Polygon (MATIC) Explained: What Is the Polygon Crypto?

You may have heard of Polygon and its native cryptocurrency, MATIC, before; you may even own some MATIC because it is not an obscure coin by any means; it’s a top-20 coin, and Mark Cuban has invested in it.

That said, Polygon does have a significant downside that I will tell you about later in this article.

So what is Polygon and how does it work?

Before we discuss what Polygon is, let’s talk about the history of this project.

The project was originally called Matic, and though it rebranded to Polygon in February 2021, its coin is still called Matic.

This is Polygon’s stated vision:

We envision an open, borderless world. A world in which people and machines collaborate and exchange value globally and freely, without gatekeepers or intermediaries. A world in which communities thrive, unconstrained by artificial borders and archaic regulations.
We will strive to empower everyone to effortlessly join this new, better world.

What Is Polygon (MATIC)?

Polygon (MATIC) is a framework for connecting ethereum-compatible blockchain networks.

On Polygon’s homepage, it says:

Polygon is a protocol and a framework for building and connecting ethereum-compatible blockchain networks. Aggregating scalable solutions on ethereum supporting a multi-chain wthereum ecosystem.

So essentially, Polygon’s goal is to connect ethereum-compatible blockchains in a scalable way.

But what does this mean and why do we need something like Polygon if we already have ethereum?

Ethereum is the second-largest cryptocurrency by market capitalization, and it is the world’s most-used blockchain.

Even though bitcoin has a larger market capitalization than ethereum, ethereum is more widely-used for cryptocurrency transactions.

In fact, most of the NFTs that we discuss on the site are built on ethereum.

But ethereum has limitations and what some would call problems, and it’s these problems that Polygon is attempting to address.

So to truly understand why Polygon exists and the purpose it serves, you need to understand the limitations of ethereum and how Polygon addresses them.

To help you understand these things, we will draw on information found in the Polygon Lightpaper as well as the original Matic Whitepaper because to really understand a project you have to read its whitepaper and other documentation. 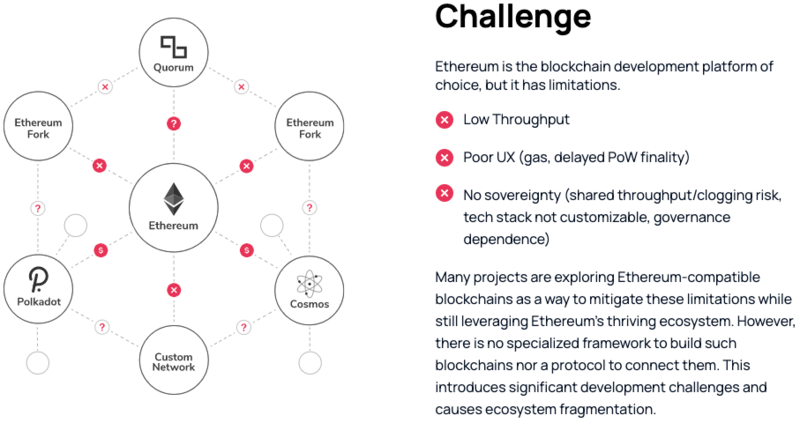 Polygon addresses each of these problems.

Throughput is defined as the rate of production or the rate at which something is processed and specifically in the case of ethereum it refers to the rate of successful transactions over the network.

So you can see that in order for widespread blockchain or at least widespread ethereum blockchain adoption to happen, something has to change.

And that’s why you hear about all these so-called “ethereum killers” like Cardano (ADA) and Solana (SOL) because those networks — especially Solana — can handle multiple times more transactions per second than the ethereum network can.

The downside of some of these “ethereum killers” — as Polygon points this out in its whitepaper — is that they “compromise on decentralization in order to improve transaction speeds.”

For example, Solana relies fairly heavily on its founders and their organization, the Solana Foundation, in order for it to run just like Visa relies on the Visa corporation to run its network, and with some merit some in crypto argue that this is antithetical to entire idea of a blockchain.

The Cost of Centralization

Now, one could argue that all blockchains — all projects even — start off very centralized and eventually become more and more decentralized, but that’s a discussion for a different day.

Of course, Polygon, as a sidechain — and I’ll talk about what that means later in this article — has some centralization issues of its own.

When a miner produces a block on the ethereum blockchain — a block being essentially a group of new transactions on the blockchain — the block is then propagated to the rest of the network with the other nodes on the network having to add this block to the end of their blockchain, and then mining continues.

So there is a lag time there between the time that a block is produced on the ethereum blockchain and the time it takes for the other miners to add that new block to the end of their blockchain.

Here’s what Polygon says about this issue in its whitepaper:

Public blockchains have to maintain a certain amount of time lag between the production of adjacent blocks so as to ensure ample time for block propagation. Also, the block size needs to be small so as to ensure quick propagation of the block through the network. This entails that the number of transactions in a particular block need to be fairly limited.

So ethereum can simply not handle very many transactions at once due to this block production and propagation issue.

So what is Polygon’s solution?  Here is what Polygon says in its whitepaper:

The Matic Network solves this problem by using a Block Producer layer to produce the blocks. Block Producers enable the system to produce blocks at a very fast rate. The system ensures decentralization using PoS [proof-of-stake] checkpoints which are pushed to the Mainchain (Ethereum serves as the mainchain for a start).  This enables The Matic Network to theoretically achieve up to 216 [65,000] transactions per second on a single side chain.

So Polygon employs this dual strategy in which a subset of the validators — basically stakers — on the network become block producers, that produce blocks concurrently with the main blockchain validation that’s being done by all validators in the network.

So there are two things going on at once — the main validation of the transactions on one layer and concurrently with that block production on another layer — and this dual strategy theoretically allows the Matic network to achieve up to 65,000 transactions per second.

At a basic level — and maybe this isn’t the most technically accurate analogy but I think it will make it easier to understand — it’s kind of like if you have a factory and instead of having one machine that does everything you have the main machine doing primary tasks and then you have another secondary machine working side by side the main machine getting work done at the same time.

Obviously the second scenario would be faster because now you have two machines working side-by-side rather than one.

In the world of blockchain, this secondary “side-by-side” machine is called a sidechain.

With a sidechain, you get increased efficiency, but you trade off some security because this sidechain is inherently centralized; it is essentially its own blockchain distinct from the more decentralized ethereum blockchain.

So there is a security risk there.  If the majority of Polygon token holders wanted to screw everybody else over and take all their coins, they could do that.  Is this likely?  No.  But it is a possibility.

And if I have one criticism of Polygon, it has to do with this security issue that is inherent to a sidechain.

That said, Polygon is investing in rollups and security features.  In fact, they’ve recently announced Polygon Nightfall, which is a rollup solution that they are developing in conjunction with actually the company that I used to work for, Ernst & Young.

Practically speaking, those of us who use ethereum on a regular basis complain about one thing more than anything: the gas fees.

And ethereum’s high gas fees are directly related to the limited block size of blocks on the ethereum blockchain that were discussed previously.

Here’s what Polygon has to say about this in its whitepaper:

With the rapid growth of the blockchain ecosystem, new crypto assets are increasingly being created, transferred, and sold, often involving multiple crypto tokens. Also, most decentralized apps have their own token and economy. Paying tokens for the services or doing any kind of transaction on blockchains requires on-chain transfers. Every blockchain has a transaction cost structure. For example, ethereum charges gas fees on each transaction. The amount of fees is an important factor to incentivize validators and prevent certain kinds of security attacks such as DoS [denial-of-service]. However, there is the problem of variation of fees (depending upon the pending transaction pool) due to the limited block size.

So what is Polygon’s solution?  It comes back to the dual strategy that involves using block producers to create blocks concurrently with the main transaction validation that greatly enhances efficiency, which translates to lower transaction fees.

“No sovereignty” really speaks to the lack of control that blockchain developers — like let’s say a dapp (decentralized application) developer — has over their own project built directly on the ethereum blockchain.

A blockchain developer building on ethereum is limited in the amount of control they have over their tech stack and other things.

With Polygon, however, they get more flexibility when developing their projects.

And this is why so many projects are utilizing Polygon.

These projects don’t want to wait for Ethereum 2.0; they want to start building their projects and scaling now.

Here are just some of the thousands of protects built on Polygon:

Am I Bullish on Polygon (MATIC)?

I am bullish on Polygon at least in the short-term.

It’s had a run-up recently, so if you’re just getting into Polygon now, you may just want to dollar cost average in.

This isn’t financial advice by any means, but we know that often — not always, but often — when a coin has a bit of a pump that it tends to pull back a bit afterwards.

I do think, however, that we will see some increase in the price of Polygon here in the near future.

In terms of the long-term, though, it’s tough to really predict who will be the winners when it comes to really solving these “ethereum problems” so to speak.

Not only are there competitors to Polygon — keep in mind that Polygon and its competitors don’t function in exactly the same way — but we also have Ethereum 2.0 coming.

This is all to say that it’s hard to tell who will be the long-term winners here.

Personally, I do intend to take some profits in Polygon as the price increases and put them into other projects.  That is just my strategy.  It may not be yours.  But this is what I tend to do.

Want to earn interest on your Polygon?  Check out Celsius and use the reward code 17611187cc to get a $50 bitcoin bonus when you deposit at least $400 into Celsius!